Poor People's Movements: Why They Succeed, How They Fail (Paperback) 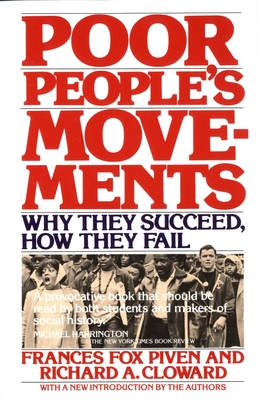 By Frances Fox Piven, Richard Cloward
$11.96
Possibly out of print. Email or call to check availability and price.

Have the poor fared best by participating in conventional electoral politics or by engaging in mass defiance and disruption? The authors of the classic Regulating The Poor assess the successes and failures of these two strategies as they examine, in this provocative study, four protest movements of lower-class groups in 20th century America:
-- The mobilization of the unemployed during the Great Depression that gave rise to the Workers' Alliance of America
-- The industrial strikes that resulted in the formation of the CIO
-- The Southern Civil Rights Movement
-- The movement of welfare recipients led by the National Welfare Rights Organization.

Richard A. Cloward was a social worker and sociologist, and was a faculty member at the Columbia University School of Social Work from 1954 until his death in 2001.

They co-authored: The Politics of Turmoil, Poor People's Movements, The New Class War, and Why Americans Don't Vote. They won the C. Wright Mills Award and various international and national awards.

"This beautifully written book is the most exciting and important political study in years."

"Of the first importance; it is bound to have a wide and various influence; and it is disturbing."