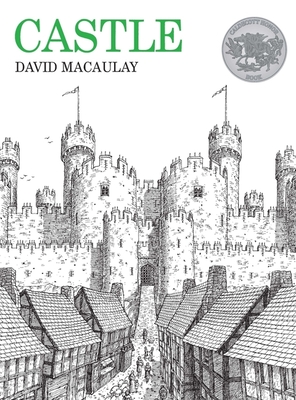 In this 1978 Caldecott Honor Book, award-winning author and illustrator David Macaulay explores the history and construction of castles in a richly illustrated resource for curious young readers.

The word itself conjures up mystery, romance, intrigue, and grandeur. What could be more perfect for an author/illustrator who has continually stripped away the mystique of architectural structures that have long fascinated modern man? With typical zest and wry sense of humor punctuating his drawings, David Macaulay traces the step-by-step planning and construction of both castle and town.

David Macaulay is an award-winning author and illustrator whose books have sold millions of copies in the United States alone, and his work has been translated into a dozen languages. Macaulay has garnered numerous awards including the Caldecott Medal and Honor Awards, the Boston Globe–Horn Book Award, the Christopher Award, an American Institute of Architects Medal, and the Washington Post–Children’s Book Guild Nonfiction Award. In 2006, he was the recipient of a MacArthur Fellowship, given “to encourage people of outstanding talent to pursue their own creative, intellectual, and professional inclinations.” Superb design, magnificent illustrations, and clearly presented information distinguish all of his books. David Macaulay lives with his family in Vermont.

"What David Macaulay can draw -- churches, cities, pyramids -- he does better than any pen-and-ink illustrator in the world. Castle once again goes through a brick-by-brick assembly, employing cross-hatches and thin black lines to evoke a medieval place and period." Time Magazine —