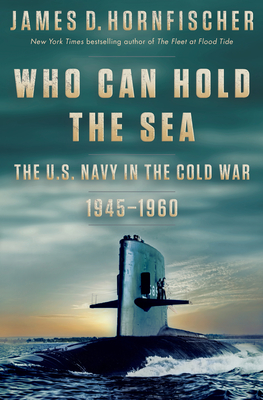 A close-up, action-filled narrative about the crucial role the U.S. Navy played in the early years of the Cold War, from the New York Times bestselling author of The Fleet at Flood Tide

This landmark account of the U.S. Navy in the Cold War, Who Can Hold the Sea combines narrative history with scenes of stirring adventure on—and under—the high seas. In 1945, at the end of World War II, the victorious Navy sends its sailors home and decommissions most of its warships. But this peaceful interlude is short-lived, as Stalin, America’s former ally, makes aggressive moves in Europe and the Far East. Winston Churchill crystallizes the growing Communist threat by declaring the existence of “the Iron Curtain,” and the Truman Doctrine is set up to contain Communism by establishing U.S. military bases throughout the world.

Set against this background of increasing Cold War hostility, Who Can Hold the Sea paints the dramatic rise of the Navy’s crucial postwar role in a series of exciting episodes that include the controversial tests of the A-bombs that were dropped on warships at Bikini Island; the invention of sonar and the developing science of undersea warfare; the Navy’s leading part in key battles of the Korean War; the dramatic sinking of the submarine USS Cochino in the Norwegian Sea; the invention of the nuclear submarine and the dangerous, first-ever cruise of the USS Nautilus under the North Pole; and the growth of the modern Navy with technological breakthroughs such as massive aircraft carriers, and cruisers fitted with surface-to-air missiles.

As in all of Hornfischer’s works, the events unfold in riveting detail. The story of the Cold War at sea is ultimately the story of America’s victorious contest to protect the free world.

James D. Hornfischer was a writer, literary agent, and book editor. He was the New York Times bestselling author of Neptune’s Inferno, The Last Stand of the Tin Can Soldiers, Ship of Ghosts, and The Fleet at Flood Tide, all widely acclaimed accounts of the U.S. Navy in the Pacific during World War II. His books have received numerous awards, including the Samuel Eliot Morison Award for Naval Literature and the Naval Historical Foundation Distinguished Service Award. James D. Hornfischer died in 2021.

“James D. Hornfischer, the dean of American naval historians, has written a book of dizzying sweep and uncommon ambition. In this meticulously researched work, we see just how resolute and resourceful the United States Navy was in facing the hydra-headed threats of the Cold War.”—Hampton Sides, author of Ghost Soldiers

“Who Can Hold the Sea is the final masterpiece of the late, great, James D. Hornfischer, the finest naval historian of his time. A lucid, brilliant and very timely history of the U.S. Navy in the Cold War, this is the capstone to a truly heroic and dazzling career.”—Alex Kershaw, author of The Liberator

“This is a superb valedictory offering by one of the great storytellers of our time. In vivid and evocative prose, James D. Hornfischer offers a fully contextualized narrative of a defining era in world history. His sketches of the leading players bring them fully to life, and his coverage of the war in Korea is edge-of-your-seat gripping.”—Craig L. Symonds, author of World War II at Sea

“In his final volume, James D. Hornfischer brilliantly re-creates the panoramic story of the U.S. Navy in the first fourteen years after the Japanese surrender in Tokyo Bay. In his master hands, the whole range of novel military and political events, the epochal technological breakthroughs of nuclear power and ballistic missiles, and a long roster of important other stories fall in smoothly.”—Richard B. Frank, author of Tower of Skulls

“Who Can Hold the Sea is a perfect follow-on to James D. Hornfischer’s four superb standard-setting books on the U.S. Navy in the Pacific during World War II. It is well researched, superbly written, and insightful. The United States’ history is that of a maritime nation, and Hornfischer’s legacy is to have superbly told that story from the deckplate.”—General Mike Hagee, USMC (Ret), CEO, Admiral Nimitz Foundation

“This excellent naval history elucidates how the atomic bomb and nuclear power shaped the geopolitical rivalry between the U.S. and the Soviet Union . . . Hornfischer unearths fascinating anecdotes . . . . [and] enlivens the proceedings with sharp analysis and lucid prose. This impressively researched and thoroughly accessible account fires on all cylinders.”—Publishers Weekly (starred review)

“With half a dozen accounts of the U.S. Navy under his belt, award-winning naval historian Hornfischer does not disappoint with his latest. . . . Hornfischer offers adept accounts of atomic tests and the Navy’s creation of a nuclear strike force. Readers will enjoy the history of the atomic submarine . . . An expert account for fans of military history.”—Kirkus Reviews