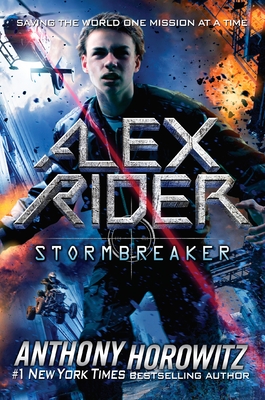 This is book number 1 in the Alex Rider series.

They told him his uncle died in an accident. He wasn't wearing his seatbelt, they said. But when fourteen-year-old Alex finds his uncle's windshield riddled with bullet holes, he knows it was no accident. What he doesn't know yet is that his uncle was killed while on a top-secret mission. But he is about to, and once he does, there is no turning back. Finding himself in the middle of terrorists, Alex must outsmart the people who want him dead. The government has given him the technology, but only he can provide the courage. Should he fail, every child in England will be murdered in cold blood.

The first in a thrilling new series by British writer Anthony Horowitz, Stormbreaker will have pulses racing from start to finish.

Anthony Horowitz (anthonyhorowitz.com) is a world-renowned screenwriter for film and television, having received multiple awards. And he is, of course, the author of the #1 New York Times bestselling Alex Rider novels, which have become bestsellers the world over, spawned a major motion picture, and a line of graphic novels. A master of the spy thriller, Anthony is the only writer authorized by both the Arthur Conan Doyle and Ian Fleming Estates to write original Sherlock Holmes and James Bond novels, respectively. Anthony lives with his wife in London, England; they are parents to two grown boys. Follow Anthony on Twitter @AnthonyHorowitz.