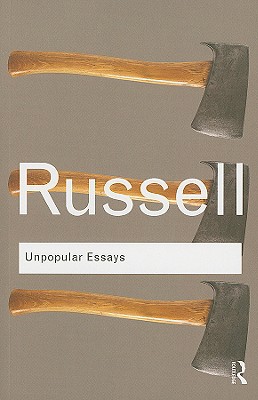 A classic collection of Bertrand Russell's more controversial works, reaffirming his staunch liberal values, Unpopular Essays is one of Russell's most characteristic and self-revealing books. Written to combat... the growth in Dogmatism, on first publication in 1950 it met with critical acclaim and a wide readership and has since become one of his most accessible and popular books.

Bertrand Russell (1872-1970) was one of the most formidable thinkers of the modern era. A philosopher, mathematician, educational innovator, champion of intellectual, social and sexual freedom, and a campaigner for peace and human rights, he was also a prolific writer of popular and influential books, essays and lectures on an extensive range of subjects. Considered to be one of the most controversial figures of the twentieth century, Bertrand Russell is widely renowned for his provocative writings. These definitive works offer profound insights and forward-thinking perspectives on a changing western society progressively shaped, most significantly, by two world wars, the decline of British imperialism and an evolving moral landscape.