The Fortune Cookie Chronicles: Adventures in the World of Chinese Food (Paperback) 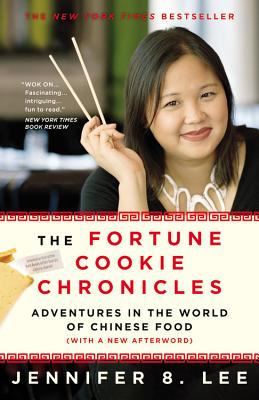 If you think McDonald's is the most ubiquitous restaurant experience in America, consider that there are more Chinese restaurants in America than McDonalds, Burger Kings, and Wendys combined. New York Times reporter and Chinese-American (or American-born Chinese). In her search, Jennifer 8 Lee traces the history of Chinese-American experience through the lens of the food. In a compelling blend of sociology and history, Jenny Lee exposes the indentured servitude Chinese restaurants expect from illegal immigrant chefs, investigates the relationship between Jews and Chinese food, and weaves a personal narrative about her own relationship with Chinese food.

The Fortune Cookie Chronicles speaks to the immigrant experience as a whole, and the way it has shaped our country.

Jennifer 8 Lee, the daughter of Chinese immigrants and a fluent speaker of Mandarin Chinese herself, grew up eating her mother's authentic Chinese food in her family's New York City kitchen before graduating from Harvard in 1999 with a degree in Applied Mathematics and economics and studying at Beijing University. At the age of 24, she was hired by the New York Times, where she is a metro repoter and has written a variety of stories on culture, poverty, and technology.

Lee travels wide and digs deep to unearth the answers to several burning questions...
From all-you-can-eat buffets in Kansas to the small southern Chinese village of Jietoupu, where she tracks down descendants of General Tso (who, natch, have never heard of, seen or tasted their forefather's infamous chicken dish), the author takes readers by the hand and brings them on her adventure.

"Readers will take an unexpected and entertaining journey-through culinary, social and cultural history-in this delightful first book on the origins of the customary after-Chinese-dinner treat by New York Times reporter Lee. ... Lee also pries open factoids and tidbits of American culture that eventually touch on large social and cultural subjects such as identity, immigration and nutrition. Copious research backs her many lively anecdotes, and being American-born Chinese yet willing to scrutinize herself as much as her objectives, she wins the reader over. Like the numbers on those lottery fortunes, the book's a winner."—Publisher's Weekly, Starred Review

"Jennifer 8. Lee has cracked the world of Chinese restaurants like a fortune cookie. Her book is an addictive dim-sum of fact, fun, quirkiness and pathos. It's Anthony Bourdain meets Calvin Trillin. Lee is the kind of reporter I can only dream of being: committed, compassionate, resourceful, and savvy. I devoured this book in two nights (in bed), and suggest you do the same."—Mary Roach, author of STIFF and SPOOK

"Those of us who eat Chinese food are lucky to have Jennifer Lee as a guide to the modern global migrations and individual ingenuity that have made it the world's favorite cuisine. "—Sasha Issenberg, author of THE SUSHI ECONOMY

"[Lee] embeds her subject's history in an entertaining personal narrative, eschewing cookie-cutter interviews and dry lists of facts and figures . . . she has a breezy, likable literary demeanor that makes the first-person material engaging. Thanks to Lee's journalistic chops, the text moves along energetically even in its more expository sections . . . Tasty morsels delivered quickly and reliably."
—Kirkus Reviews