Into the Storm: Destroyermen, Book I (Mass Market) 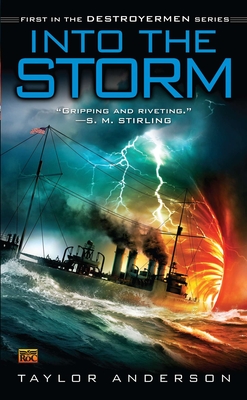 This is book number 1 in the Destroyermen series.

A captain and his crew journey out of time and into battle in the first novel in New York Times bestselling author Taylor Anderson’s alternate history Destroyermen saga.

Pressed into service when World War 2 breaks out in the Pacific, USS Walker—a Great War–era destroyer—finds itself in full retreat from pursuit by Japanese battleships. Its captain, Lieutenant Commander Matthew Patrick Reddy, heads Walker into a squall for cover. They emerge somewhere else...

Familiar landmarks appear, but the water teems with vicious, monstrous fish—and there appear to be dinosaurs grazing onshore. Matt and his crew have entered an alternate world...and they are not alone. Humans have not evolved, but two other species have. And they are at war.

Reddy and the crew of the Walker have the power and weaponry capable of turning a primitive war into a genocidal Armageddon. Now they must decide which species they will support, because the side they choose will be victorious...

Taylor Anderson is the New York Times bestselling author of the Destroyermenseries. A gunmaker and forensic ballistic archaeologist, Taylor has been a technical and dialogue consultant for movies and documentaries. He is also a member of the National Historical Honor Society and the United States Field Artillery Association, which awarded him the Honorable Order of St. Barbara. He has a master’s degree in history and has taught that subject at Tarleton State University in Stephenville, Texas. He lives in nearby Granbury with his family.