To Be Young, Gifted and Black (Mass Market) 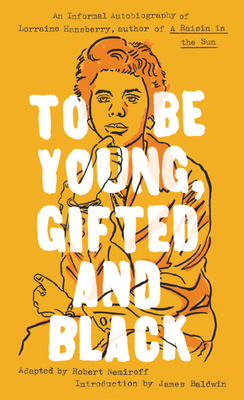 “Anyone who has ever wondered what it really means to be black will find the answer in this book.”—MINNEAPOLIS TRIBUNE

To Be Young, Gifted and Black is a special kind of autobiography, in a very special voice. Both the story and the voice belong to a young woman from Chicago who moved to New York, won fame with her first play, A Raisin in the Sun—and went on to new heights of artistry before her tragically early death.

In turns angry, loving, bitter, laughing, and defi antly proud, the story, voice, and message are all Lorraine Hansberry’s own, coming together in one of the major works of the black experience in mid-twentieth-century America.

“I advise anybody who is interested in the human condition, black or white, to read it.”—NEWSDAY

Lorraine Hansberry, at twenty-nine, became the youngest American, the fifth woman, and the first black playwright to win the New York Drama Critics Circle Award for the Best Play of the Year. Her A Raisin in the Sun has since been published and produced in some 30 countries, while her film adaptation was nominated by the New York critics for the Best Screenplay and received a Cannes Film Festival Award. At thirty-four, during the run of her second play, The Sign in Sidney Brustein’s Window, Lorraine Hansberry died of cancer. In the years since her death, her stature has continued to grow. To Be Young, Gifted and Black, a dramatic portrait of the playwright in her own words, was the longest-running Off-Broadway drama of 1969, and has been recorded, filmed, and published in expanded book form, and has toured an unprecedented forty states and two hundred colleges. In 1986, following the stage production of the 25th anniversary of A Raisin in the Sun by the Roundabout Theatre in New York City, the play was widely acclaimed as in the foremost ranks of American classics. In 1990, the PBS American Playhouse TV adaptation of the 25th-anniversary version had one of the highest viewing audiences in PBS history. Les Blancs, her last play—posthumously performed on Broadway and recently in prominent regional theaters—has been hailed by a number of critics as her best.

James Baldwin (1924–1987) was a novelist, essayist, playwright, poet, and social critic. His first novel, Go Tell It on the Mountain, appeared in 1953 to excellent reviews, and his essay collections Notes of a Native Son and The Fire Next Time were bestsellers that made him an influential figure in the growing civil rights movement. Baldwin spent much of his life in France, where he moved to escape the racism and homophobia of the United States. He died in France in 1987, a year after being made a Commander of the French Legion of Honor.