Between Two Worlds: How the English Became Americans (Hardcover) 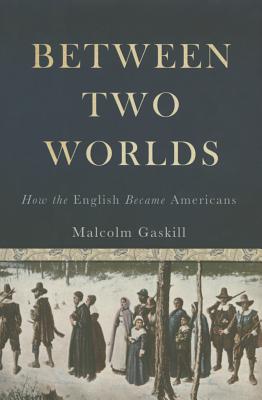 By Malcolm Gaskill
$35.00
Possibly out of print. Email or call to check availability and price.

In the 1600s, over 350,000 intrepid English men, women, and children migrated to America, leaving behind their homeland for an uncertain future. Whether they settled in Jamestown, Salem, or Barbados, these migrants -- entrepreneurs, soldiers, and pilgrims alike -- faced one incontrovertible truth: England was a very, very long way away.

In Between Two Worlds, celebrated historian Malcolm Gaskill tells the sweeping story of the English experience in America during the first century of colonization. Following a large and varied cast of visionaries and heretics, merchants and warriors, and slaves and rebels, Gaskill brilliantly illuminates the often traumatic challenges the settlers faced. The first waves sought to recreate the English way of life, even to recover a society that was vanishing at home. But they were thwarted at every turn by the perils of a strange continent, unaided by monarchs who first ignored then exploited them. As these colonists strove to leave their mark on the New World, they were forced -- by hardship and hunger, by illness and infighting, and by bloody and desperate battles with Indians -- to innovate and adapt or perish.

As later generations acclimated to the wilderness, they recognized that they had evolved into something distinct: no longer just the English in America, they were perhaps not even English at all. These men and women were among the first white Americans, and certainly the most prolific. And as Gaskill shows, in learning to live in an unforgiving world, they had begun a long and fateful journey toward rebellion and, finally, independence

Malcolm Gaskill is Professor of Early Modern History at the University of East Anglia and the author of four books, including Witchfinders: A Seventeenth-Century English Tragedy. A Fellow of the Royal Historical Society, Gaskill lives near Cambridge, England.

Karen Kupperman, author of The Jamestown Project
“Between Two Worlds offers a comprehensive history of the English people's experience in America in the seventeenth century, in its continuing and changing relation to events in England. By including people in all the colonies and at all levels of society, we gain a true and compelling picture of these experiences.”

Mary Beth Norton, Professor of American History at Cornell University and author of In the Devil's Snare: The Salem Witchcraft Crisis of 1692
“A well-written, refreshing examination of seventeenth-century America (including both mainland and Caribbean settlements) from the English perspective. Written by an accomplished English historian, Between Two Worlds will provide readers with many new insights into the conservative English people who became Americans almost in spite of themselves.”

James Horn, author of A Land As God Made It: Jamestown and the Birth of America
“This is a superb book. It could stand alone as a sweeping and comprehensive account of the first century of English settlement in The New World. But Malcolm Gaskill goes further and offers us a fascinating view of the formation of an English America in which colonists gradually become Americans and the English at home become increasingly distant. Between Two Worlds is simply the best book on the subject.”

Charleston Post & Courier
“Historian Malcolm Gaskill melds panoramic brushstrokes with sharply drawn personalities and intimate details in examining the English experience in America during the first 100 years of colonization. In doing so, he has produced a comprehensive, frequently engrossing chronicle of the challenges faced by three generations of a large and varied company of pilgrims adapting to an alien landscape.... His is an admirable book buttressed by exhaustive research.”

Virginian-Pilot
“Gaskill is good at demonstrating how little effort the Crown invested in nurturing and managing the colonies.... Between Two World is often fascinating.”

Publishers Weekly
“An in-depth look at the experiences of the first three generations of English settlers on the American continent that examines their slow transformation into a new culture.... Meticulously-researched and drawing on a plenitude of original source material, Gaskill's study provides an underrepresented view of early American history.”

Kirkus
“A comprehensive history of America's colonists, who struggled to separate while remaining English, and the English, who just wanted a cash cow.”

Library Journal
“[Gaskill] has an immense understanding of the period, quoting ably from hundreds of primary sources.”

Choice
“This vividly written work effectively explores the multiple ways each colonial venture reflected and influenced a rapidly transforming, crisis-ridden England, as well as the effects of England's experience on them.... In short, this book provides an excellent synthesis and nuanced interpretation of a complex and crucial era of English and American history.”

Washington Independent Review of Books
“A comprehensive, readable, and palatable history…Between Two Worlds is a scholarly work that has the added benefit of being extremely well written — a combination that is always welcome in the realm of historical literature. Although Gaskill writes to support his premise, he never loses sight of the fact that he is telling a story, albeit a highly complex one.”

Times Higher Education Supplement
“A beautifully written, sweeping and yet fine-grained account.... Its rich narrative explores the many reasons why people went to America in pursuit of their own dreams, from wealthy folk desiring estates and farmers seeking their own farms, to Puritans demanding the freedom to worship.... There are many fine books on British and Irish migration to colonial America, and this deserves a foremost place among them.”

Kirkus
“Gaskill approaches the record from a fresh tangent, reminding us that few histories have focused on the interplay between the colonies and England, between landscape and distance, self-image and colonizing fervor.... Richly detailed.”

Mike Zuckerman, Professor of History, University of Pennsylvania
“Between Two Worlds may be the most vivid evocation of English experience in America that we have ever had. It fuses imperial politics and everyday economic life, high theology and humdrum horror, good omens and bad faith, courage and conniving and disaster and sudden death into the most compelling—and gorgeously written—account of early New England that I know. Every page is alive with incident and insight. Gaskill makes us see and feel and almost smell and touch and sense the hopes and fears of those Puritan adventurers, in prose of extraordinary pungency and eloquence. He captures brilliantly the ways in which English men and women in the New World clung longingly to the manners they remembered (or imagined) and, as they did, despite themselves, became something other than what they clung to, something perhaps American. This is history in the grand manner.”

Wall Street Journal
“Lively...an entertaining romp through kaleidoscopic images of colonists coping with the shock of the new while clinging to the older verities of their origins.... Readers can delight in Mr. Gaskill's winning narration of the old certainties in a new style.”

Times Literary Supplement
“According to Malcolm Gaskill's lively history of the first century of colonization, the last thing these intrepid emigrants intended to do was give birth to America.... A powerful antidote to narratives that celebrate an exceptionalist American history untethered to its English past.”

Independent, UK
“Gaskill has written a work of extraordinary scholarship. It captures the spirit of adventure and courage of the first settlers but it also shows how high ideals were transformed by the harsh realities of life.”

Times, UK
"This book is not meant to be a history of 17th century America, though it succeeds rather well in that regard. Gaskill instead seeks to chart the development of a distinctive American identity in the new world. He succeeds quite brilliantly."