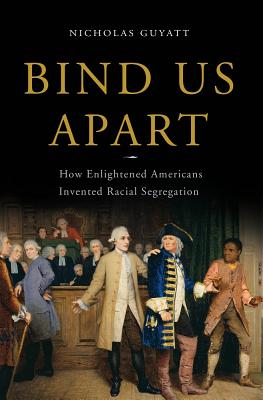 By Nicholas Guyatt
$32.00
Possibly out of print. Email or call to check availability and price.

Why did the Founding Fathers fail to include blacks and Indians in their cherished proposition that "all men are created equal"? The usual answer is racism, but the reality is more complex and unsettling. In Bind Us Apart, historian Nicholas Guyatt argues that, from the Revolution through the Civil War, most white liberals believed in the unity of all human beings. But their philosophy faltered when it came to the practical work of forging a color-blind society. Unable to convince others-and themselves-that racial mixing was viable, white reformers began instead to claim that people of color could only thrive in separate republics: in Native states in the American West or in the West African colony of Liberia.

Herein lie the origins of "separate but equal." Decades before Reconstruction, America's liberal elite was unable to imagine how people of color could become citizens of the United States. Throughout the nineteenth century, Native Americans were pushed farther and farther westward, while four million slaves freed after the Civil War found themselves among a white population that had spent decades imagining that they would live somewhere else.

Essential reading for anyone disturbed by America's ongoing failure to achieve true racial integration, Bind Us Apart shows conclusively that "separate but equal" represented far more than a southern backlash against emancipation-it was a founding principle of our nation.

Nicholas Guyatt is a university lecturer in history at the University of Cambridge. He is a regular contributor to the Nation, London Review of Books, and Guardian. Guyatt lives in Cambridge, England.

"Read this after listening to your 'Hamilton' cast recording."—Pittsburgh Post-Gazette

"[A] compelling work of wide research.... A nuanced study of the illusory, troubling early arguments over emancipation and integration." —Kirkus Reviews

"A timely and instructive look at how deeply racism is embedded in America's past."—Publishers Weekly

"Nicholas Guyatt offers an elegant and illuminating analysis of the winding and tortured path to the separate and unequal society we recognize even today. This is a must read for all who are interested in the origins of America's troubled racial landscape."—Annette Gordon-Reed, professor of law and professor of history at Harvard University

"Nicholas Guyatt is a master storyteller and a brilliant scholar. With Bind Us Apart, he has written a provocative and counter-intuitive--but never contrarian or glib--account of the origins of segregation in the United States. This book is absolutely essential reading for anyone interested in understanding the racial fault lines that continue to divide this country today."—Ari Kelman, McCabe Greer Professor of History at Penn State University and author of A Misplaced Massacre: Struggling Over the Memory of Sand Creek

"Nicholas Guyatt brilliantly captures the tragically unintended consequences of liberal reformers' efforts to create a just and enlightened multiracial society in the new United States. Dedication to the principles of the Declaration of Independence ultimately led reformers to embrace both the colonization of former slaves and the removal of Native Americans. Sympathetically engaging with his well-intentioned subjects, Guyatt compels us to engage with what it has meant--and still means--to be American. Powerfully argued and beautifully written, Bind Us Apart is essential reading." —Peter S. Onuf, author of Jefferson's Empire: The Language of American Nationhood

"[A] brilliant and provocative new book.... By demonstrating that segregationist ideas began at the founding, were sanctioned by well-intentioned white liberals, and had spread across the nation, Guyatt has written a remarkable history that matches the gravity of the problem."—New Republic

"Ambitious, intriguing... this is a useful, fascinating revisionist examination of US views and policies on race before the Civil War... Highly recommended."—Choice