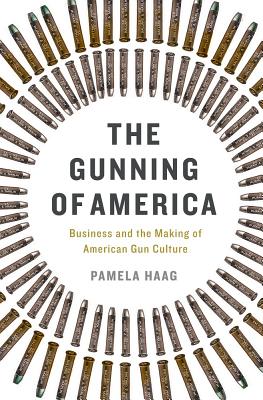 By Pamela Haag
$29.99
Possibly out of print. Email or call to check availability and price.

Americans have always loved guns. This special bond was forged during the American Revolution and sanctified by the Second Amendment. It is because of this exceptional relationship that American civilians are more heavily armed than the citizens of any other nation.

Or so we're told.

In The Gunning of America, historian Pamela Haag overturns this conventional wisdom. American gun culture, she argues, developed not because the gun was exceptional, but precisely because it was not: guns proliferated in America because throughout most of the nation's history, they were perceived as an unexceptional commodity, no different than buttons or typewriters.

Focusing on the history of the Winchester Repeating Arms Company, one of the most iconic arms manufacturers in America, Haag challenges many basic assumptions of how and when America became a gun culture. Under the leadership of Oliver Winchester and his heirs, the company used aggressive, sometimes ingenious sales and marketing techniques to create new markets for their product. Guns have never "sold themselves"; rather, through advertising and innovative distribution campaigns, the gun industry did. Through the meticulous examination of gun industry archives, Haag challenges the myth of a primal bond between Americans and their firearms.

Over the course of its 150 year history, the Winchester Repeating Arms Company sold over 8 million guns. But Oliver Winchester-a shirtmaker in his previous career-had no apparent qualms about a life spent arming America. His daughter-in-law Sarah Winchester was a different story. Legend holds that Sarah was haunted by what she considered a vast blood fortune, and became convinced that the ghosts of rifle victims were haunting her. She channeled much of her inheritance, and her conflicted conscience, into a monstrous estate now known as the Winchester Mystery House, where she sought refuge from this ever-expanding army of phantoms.

In this provocative and deeply-researched work of narrative history, Haag fundamentally revises the history of arms in America, and in so doing explodes the clichÃ©that have created and sustained our lethal gun culture.

Pamela Haag holds a Ph.D. in history from Yale University. Her work on a diverse range of topics has appeared in many venues such as American Scholar, NPR, Slate, and the Times (London).

"In her remarkable new book, The Gunning of America, historian Pamela Haag undercuts much of the charged rhetoric about the importance of firearms in the nation's culture and history with a richly sourced, empirical look at the 19th century origins of the gun business and the men who made it."
—Boston Globe

"[An] inspired new book... Haag's book is strongest when it upends the belief that America has had an uninterrupted love affair with guns."—San Francisco Chronicle

"[A] fascinating exploration of the major businesses and families that have manufactured firearms--and manufactured the seductiveness of firearms--in this country over the past 150 years."—Carlos Lozada, Washington Post

"A revealing new account of the origins of America's gun industry."—New York Review of Books

"[A] fascinating account.... Both convincingly argued and eminently readable, Haag's book will intrigue readers on all sides of the gun control debate."—Publishers Weekly, "starred review"

"In her masterful The Gunning of America, Pamela Haag furnishes a salutary corrective to the perception of the gun's inevitability in American life by showing its history as a commodity invented and then deliberately marketed and distributed like any other widget or household appliance.... [A] beautifully composed and meticulously researched volume."—New Republic