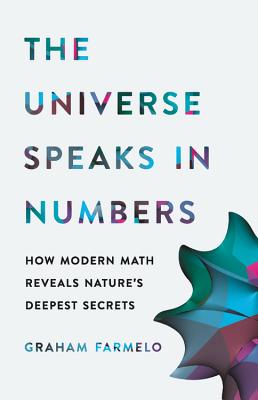 How math helps us solve the universe's deepest mysteriesOne of the great insights of science is that the universe has an underlying order. The supreme goal of physicists is to understand this order through laws that describe the behavior of the most basic particles and the forces between them. For centuries, we have searched for these laws by studying the results of experiments. Since the 1970s, however, experiments at the world's most powerful atom-smashers have offered few new clues. So some of the world's leading physicists have looked to a different source of insight: modern mathematics. These physicists are sometimes accused of doing 'fairy-tale physics', unrelated to the real world. But in The Universe Speaks in Numbers, award-winning science writer and biographer Farmelo argues that the physics they are doing is based squarely on the well-established principles of quantum theory and relativity, and part of a tradition dating back to Isaac Newton. With unprecedented access to some of the world's greatest scientific minds, Farmelo offers a vivid, behind-the-scenes account of the blossoming relationship between mathematics and physics and the research that could revolutionize our understanding of reality.A masterful account of the some of the most groundbreaking ideas in physics in the past four decades. The Universe Speaks in Numbers is essential reading for anyone interested in the quest to discover the fundamental laws of nature.

Graham Farmelo is the author of several books, including The Strangest Man, which won the Los Angeles Times Book Prize. Farmelo is a Fellow at Churchill College at the University of Cambridge, an Affiliated Professor at Northeastern University, and is a regular visitor at the Institute for Advanced Study in Princeton. He lives in London.

"Will pure mathematics prevail over dogged experiments in investigating the physical world? Is the fulfillment of the Pythagorean dream of a mathematical universe finally at hand? Mr. Farmelo, deeply impressed with the accomplishments of Einstein, Dirac and string theorists, is optimistic."—Wall Street Journal

"These are brilliant successes of the mathematical approach, and Farmelo leads us through them adeptly, with a mixture of contemporary accounts and scientific insight."—Nature

"Despite the difficulties of writing about such specialised technical material, Farmelo has succeeded in writing a book for the general reader that gives insights into the motivation behind a theory developed by many of today's leading thinkers. His book provides as clear an account of the subject as I can imagine for a non-specialist reader."—Times Higher Education (UK)

"A riveting account of one of the greatest stories of our time. Graham Farmelo has delved deep into this fascinating subject, combining original scholarship and lively interviews with leading contemporary theorists at the forefront of the field. The result is a masterful book, which gives us, for the first time, a behind-the-scenes look at how physicists and mathematicians, driven by their pursuit of ultimate Truth, have been drawn into common territory by mysterious intellectual forces seemingly beyond their control."—Nima Arkani-Hamed, professor, Institute of Advanced Study, Princeton

"A thought-provoking look at a fierce, ongoing controversy over the future of theoretical physics."—Kirkus

"Crisply-written, entertaining and extraordinarily well-informed. The most popular and elegant theories of what makes the cosmos tick are becoming harder---even impossible---to test directly but Graham Farmelo argues in this tour de force that they're still taking us deep into the mathematical heart of reality."—Roger Highfield, author, journalist, and Director of External Affairs at the Science Museum, London

"This fascinating, splendidly readable, extensively researched, and remarkably up-to-date book takes readers from the days of Newton to the forefront of modern theoretical physics and shows how current research has reshaped the fields of physics and mathematics to the enrichment of both."—Jeremy Gray, emeritus professor, Open University

"Farmelo expertly narrates the history of the dynamic dance between mathematics and theoretical physics, from Newton to Einstein to string theory and beyond. This book will be a must-read for anyone interested in either subject's history or present for many years ahead."—Jacob Bourjaily, associate professor of physics, Niels Bohr International Academy, Copenhagen University

"A superbly written, riveting book. In elegant prose, and using virtually no equations, Farmelo describes the ongoing quest of great thinkers to understand the bedrock nature of reality, from the microworld to the cosmos."—Martin Rees, astronomer royal, emeritus professor of cosmology and astrophysics, University of Cambridge

"I am overcome with admiration for its range and profundity. An amazing achievement."—Michael Frayn