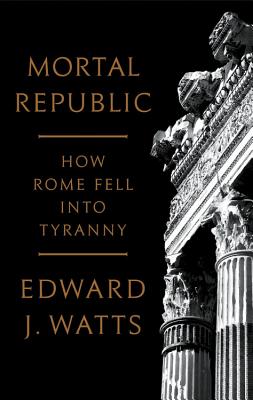 By Edward J. Watts
$32.00
Possibly out of print. Email or call to check availability and price.

Learn why the Roman Republic collapsed -- and how it could have continued to thrive -- with this insightful history from an award-winning author.

In Mortal Republic, prize-winning historian Edward J. Watts offers a new history of the fall of the Roman Republic that explains why Rome exchanged freedom for autocracy. For centuries, even as Rome grew into the Mediterranean's premier military and political power, its governing institutions, parliamentary rules, and political customs successfully fostered negotiation and compromise.

By the 130s BC, however, Rome's leaders increasingly used these same tools to cynically pursue individual gain and obstruct their opponents. As the center decayed and dysfunction grew, arguments between politicians gave way to political violence in the streets. The stage was set for destructive civil wars -- and ultimately the imperial reign of Augustus.

The death of Rome's Republic was not inevitable. In Mortal Republic, Watts shows it died because it was allowed to, from thousands of small wounds inflicted by Romans who assumed that it would last forever.

Edward J. Watts holds the Alkiviadis Vassiliadis Endowed Chair and is professor of history at the University of California, San Diego. The author and editor of several prize-winning books, including The Final Pagan Generation, he lives in Carlsbad, California.

"[An] incisive history...Watts describes how the rise of an economic élite and increasing inequality brought about populist sentiment that was easily exploited by nefarious politicians. The parallels to the present day are striking."—New Yorker

"If the central analogy that animates Mortal Republic is correct, the current challenge to America's political system is likely to persist long after its present occupant has left the White House."—New York Times Book Review (Editor's Choice)

"Mortal Republic provides excellent insights into how the Republic became the Empire, and more broadly it speaks to the ever-present threat of centralized power. The more a civilization centralizes, the more powerful a central government becomes."—New York Journal of Books

"Watts chronicles the ways the republic, with a population once devoted to national service and personal honor, was torn to shreds by growing wealth inequality, partisan gridlock, political violence and pandering politicians, and argues that the people of Rome chose to let their democracy die by not protecting their political institutions, eventually turning to the perceived stability of an emperor instead of facing the continued violence of an unstable and degraded republic."—Smithsonian

"Readers will find many parallels to today's fraught political environment: the powerful influence of money in politics, a 'delegitimized establishment,' and 'the emergence of a personality-driven, populist politicking.' Watts ably and accessibly...covers a lot of ground in a manner accessible to all readers, including those with little knowledge of Roman history. This well-crafted analysis makes clear the subject matter's relevance to contemporary political conversations."—Publishers Weekly

"In a timely book of ancient history, an eminent classicist looks at Rome's decline from representative government to corrupt empire.... Given that mistrust of institutions is a key ingredient in the collapse of republican rule, as we are witnessing daily, the lesson is pointed. An engaging, accessible history that, read between the lines, offers commentary on today's events as well as those of two millennia past."—Kirkus

"Lucid, fast-paced, and well informed. Edward Watts's history of the failure of the Roman Republic is the tale of how greed and self-interest undermined the ancient world's most successful democratic superpower and caused Rome's people to vote in a dictatorship. Beginning with Rome's confrontations with Pyrrhus and Carthage, and a relatively simple state based on reasonable equity, Watts takes us into a world of the super-rich who undermined the very system that gave them their wealth, driving it downwards into civil war and mass murder. The elective tyranny of Augustus proved to be the only answer. This is both a splendid introduction to one of the most dramatic periods of history and a book for our times."—David Potter, author of Constantine the Emperor

"Mortal Republic retells the familiar story of how one of history's most famous and long-lived republics became a monarchy. Edward Watts is an expert and eloquent guide through the political drama of the late republic, and his book offers a timely reminder that constitutions are fragile and that the politics of consensus can be replaced by the politics of violence one small selfish act at a time."—Kyle Harper, author of The Fate of Rome: Climate, Disease, and the End of an Empire