Paul's Case and Other Stories (Paperback) 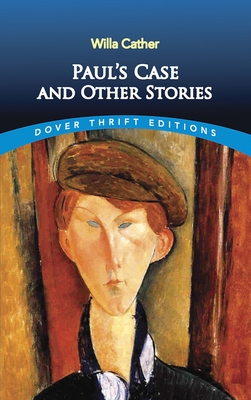 By Willa Cather
$3.00
Possibly out of print. Email or call to check availability and price.

"In Cather’s often-anthologized short story from 1905, the protagonist is a dreamy, yearning youth who flees his drab life in Pittsburgh for a decadent binge in New York City. His trajectory, like Harrison’s, recalls the tragic paths of aspirational American figures such as Lily Bart in Edith Wharton’s The House of Mirth and F. Scott Fitzgerald’s The Great Gatsby, with one distinction. Paul, like Harrison, is considered “temperamental,” which back then was often understood to be code. Today we might say gay, queer, or LGBTQ, although, when possible, in Twilight Man I tried to use the language of the era, to render people in their own terms." - Liz

Increasingly regarded as a major 20th-century writer, Willa Cather celebrated American pioneers and the land they worked. Her strong female characters and the elegiac quality of her writing have combined to earn her high standing with critics and the public alike. According to Maxwell Geismar, she was an aristocrat in an equalitarian order, an agrarian writer in an industrial order, a defender of the spiritual graces in the midst of an increasingly materialistic culture.
Her talents are amply displayed in this collection, which features the touching title story about a young boy locally regarded as a delinquent and social misfit, and A Wagner Matin e (both revised by Cather for publication in Youth and the Bright Medusa, 1920); as well as Lou, the Prophet (1892), a haunting tale of failure, spiritual rebirth and legendary fame; Eric Hermannson's Soul (1900), an intriguing account of a man who, after years of dissolute living, is lured into the fold of a fanatical sect; and The Enchanted Bluff (1909), bittersweet recollections of life in a pioneer river town.
Presented in this attractive, inexpensive edition, these timeless tales offer a provocative glimpse into the work of Willa Cather.

Pulitzer Prize-winning author Willa Cather (1873-1947) spent her formative years in Nebraska, which was at that time frontier territory. Her exposure to the region's dramatic environment and intrinsic hardships -- along with its diverse population of European-Americans, Native Americans, and immigrants -- shaped and informed much of her fiction.