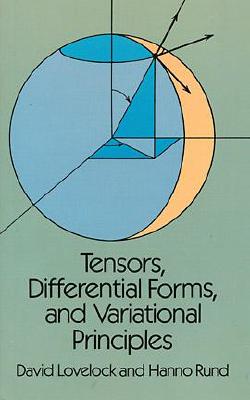 By David Lovelock, Hanno Rund
$18.95
Possibly out of print. Email or call to check availability and price.

The aim of this book is to present a self-contained, reasonably modern account of tensor analysis and the calculus of exterior differential forms, adapted to the needs of physicists, engineers, and applied mathematicians. In the later, increasingly sophisticated chapters, the interaction between the concept of invariance and the calculus of variations is examined. This interaction is of profound importance to all physical field theories.
Beginning with simple physical examples, the theory of tensors and forms is developed by a process of successive abstractions. This enables the reader to infer generalized principles from concrete situations -- departing from the traditional approach to tensors and forms in terms of purely differential-geometric concepts.
The treatment of the calculus of variations of single and multiple integrals is based ab initio on Carath odory's method of equivalent integrals. Subsequent material explores the effects of invariance postulates on variational principles, focusing ultimately on relativistic field theories. Other discussions include:
- integral invariants
- simple and direct derivations of Noether's theorems
- Riemannian spaces with indefinite metrics
The emphasis in this book is on analytical techniques, with abundant problems, ranging from routine manipulative exercises to technically difficult problems encountered by those using tensor techniques in research activities. A special effort has been made to collect many useful results of a technical nature, not generally discussed in the standard literature. The Appendix, newly revised and enlarged for the Dover edition, presents a reformulation of the principal concepts of the main text within the terminology of current global differential geometry, thus bridging the gap between classical tensor analysis and the fundamentals of more recent global theories.