Jerry Thomas' Bartenders Guide: How to Mix All Kinds of Plain and Fancy Drinks (Paperback) 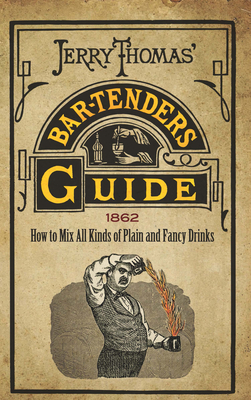 Care for a Morning Glory Cocktail, a Blue Blazer, or a Philadelphia Julep? Recipes for these and hundreds of other tasty libations appear in this landmark volume. Originally published in 1862, Jerry Thomas' Bartenders Guide is widely considered by drink historians as the first serious American book on cocktails and punches.
A new beverage is the pride of the bartender, and its appreciation and adoption his crowning glory, declared Jerry Thomas (1830-85), the most famous bartender of his era. Known as the father of American mixology, Thomas developed the showy techniques practiced at his saloons throughout California and New York. From hot whiskey toddies to wedding punch to temperance drinks, this extensive compilation of timeless recipes will delight modern-day mixologists and their guests.
There are so many bartending recipes in this book, it's doubtful you'll need any other guide. -- The Paperback Stash.

The father of American mixology, Jerry Thomas (1830-85) wrote the first cocktail book and was the most famous bartender of his era. The proprietor of saloons in California and New York, he developed showy techniques and engaged in heavy self-promotion.New York-based mixologist Pamela Wiznitzer is the Creative Director at Seamstress NY.