Economic Origins of Jeffersonian Democracy: How Hamilton's Merchant Class Lost Out to the Agrarian South (Paperback) 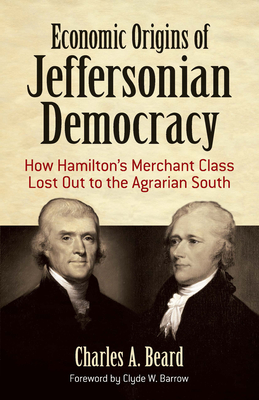 The sequel to the bestselling An Economic Interpretation of the Constitution, this volume focuses on the nation's early political history from the adoption of the Constitution through the end of the Jefferson administration. This period saw the rise and triumph of Jefferson's agrarian, slave-holding South over the mercantile-oriented urbanism of Hamilton's North, setting the stage for the ongoing clash between rural and urban America, a topic still highly relevant in the twenty-first century.
Beard defines the early period of American governance in terms of the conflict between agrarianism and fluid capital that dominated the campaign for the ratification of the Constitution. He traces this dispute across three decades into its manifestations as Federalism versus Republicanism and later into Federalism and Jeffersonian Democracy. Broad in scope, Beard's view places the struggles within the context of social and cultural developments, and his interpretation provides an excellent resource for students of the historical background of American politics.

Charles A. Beard (1874-1948) taught history at Columbia University but his considerable influence stems largely from his extensive writings in history and political science. This is the follow-up to his most famous work, which offered a controversial reassessment of the origins of the U. S. Constitution, suggesting that the Founding Fathers were motivated by economic rather than philosophical principles. Clyde W. Barrow, Ph.D., is author of More Than a Historian: The Political and Economic Thought of Charles A. Beard. Currently Professor and Chair of Political Science at the University of Texas, Rio Grande Valley, he was previously Chancellor Professor in the Policy Studies Program at the University of Massachusetts, Dartmouth, where he also served as Director of the Center of Policy Analysis.