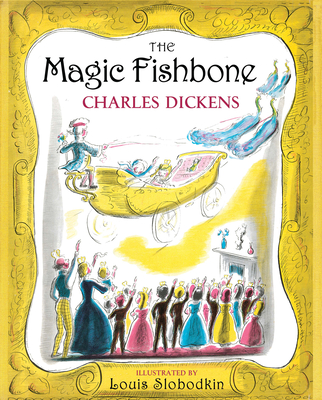 King Watkins the First is the father of the lovely and kind-hearted Princess Alicia and a tribe of eighteen other darlings. Between their money problems, the queen's illness, and the children's boisterous doings, the king and his eldest daughter are fairly overwhelmed by responsibilities. But a chance meeting with a good fairy at the fishmonger brings a bit of magic into their lives and leads the entire family toward health and happiness.
Caldecott Award-winning artist Louis Slobodkin recaptures the enchantment of Charles Dickens's The Magic Fishbone in a book that perfectly blends the gifts of one of the world's favorite storytellers with those of a great American illustrator. Readers of all ages are certain to be captivated by the little-known tale of a king whose only riches lie in his children. Winsome watercolor images grace every page of this beautiful edition.

After a childhood blighted by poverty, commercial success came early to Charles Dickens (1812-1870). By the age of 24, he was an international sensation whose new novels were eagerly anticipated. Two centuries later, Dickens' popularity endures as readers revel in the warm humanity and rollicking humor of his tales of self-discovery.At the age of 15, Louis Slobodkin (1903-1975) entered the Beaux Arts Institute of Design, where he studied drawing, composition, and sculpture. In the course of his six-year studies, he won more than 20 medals and was awarded the Louis Tiffany Fellowship. Slobodkin illustrated nearly 90 books, 50 of which he wrote, and in 1944 he received the Caldecott Medal for his illustrations for James Thurber's Many Moons.