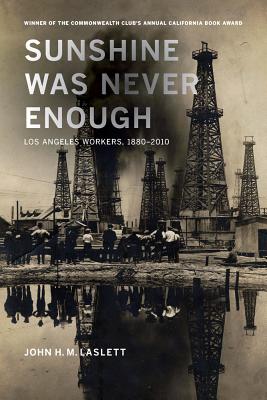 Delving beneath Southern California’s popular image as a sunny frontier of leisure and ease, this book tells the dynamic story of the life and labor of Los Angeles’s large working class. In a sweeping narrative that takes into account more than a century of labor history, John H. M. Laslett acknowledges the advantages Southern California’s climate, open spaces, and bucolic character offered to generations of newcomers. At the same time, he demonstrates that—in terms of wages, hours, and conditions of work—L.A. differed very little from America’s other industrial cities. Both fast-paced and sophisticated, Sunshine Was Never Enough shows how labor in all its guises—blue and white collar, industrial, agricultural, and high tech—shaped the neighborhoods, economic policies, racial attitudes, and class perceptions of the City of Angels.

Laslett explains how, until the 1930s, many of L.A.’s workers were under the thumb of the Merchants and Manufacturers Association. This conservative organization kept wages low, suppressed trade unions, and made L.A. into the open shop capital of America. By contrast now, at a time when the AFL-CIO is at its lowest ebb—a young generation of Mexican and African American organizers has infused the L.A. movement with renewed strength. These stories of the men and women who pumped oil, loaded ships in San Pedro harbor, built movie sets, assembled aircraft, and in more recent times cleaned hotels and washed cars is a little-known but vital part of Los Angeles history.

John Laslett is Professor Emeritus of History at the University of California, Los Angeles. He is the author or co-author of many books including Labor and the Left, Failure of a Dream?, Colliers Across the Sea, and History of the ILGWU in Los Angeles.

"Laslett has given us an indispensable resource in this broad, overarching history of workers’ movements in a remarkable city."
— Chris Rhomberg