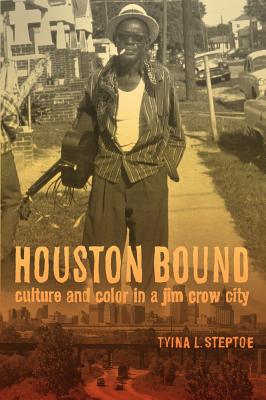 By Tyina L. Steptoe
Email or call for price

Beginning after World War I, Houston was transformed from a black-and-white frontier town into one of the most ethnically and racially diverse urban areas in the United States. Houston Bound draws on social and cultural history to show how, despite Anglo attempts to fix racial categories through Jim Crow laws, converging migrations—particularly those of Mexicans and Creoles—complicated ideas of blackness and whiteness and introduced different understandings about race. This migration history also uses music and sound to examine these racial complexities, tracing the emergence of Houston's blues and jazz scenes in the 1920s as well as the hybrid forms of these genres that arose when migrants forged shared social space and carved out new communities and politics.

This interdisciplinary book provides both an innovative historiography about migration and immigration in the twentieth century and a critical examination of a city located in the former Confederacy.

Tyina L. Steptoe is Associate Professor of History at the University of Arizona.

"Houston native Tyina L. Steptoe’s masterful work . . . honors, among others, her ancestors—Creoles of color—whose determination, work ethic, cultural ingenuity, and activism made her success possible. With the use of an impressive array of records and sources . . . the author reconstructs the complex, interwoven histories of four groups of Houstonians whose appearance during the Great Migrations helped shape the historical contours of what would ultimately become the nation’s fourth largest city."
— Southwestern Historical Quarterly

"Steptoe beautifully details the social and sonic history of race and migration in Houston between the 1920s and the 1960s."
— American Historical Review

"Tyina L. Steptoe's Houston Bound: Culture and Color in a Jim Crow City offers a welcome corrective to this historiographical oversight by examining, in fine detail the centrality of migration to understanding Houston's history."
— Journal of Southern History

". . . Attention to place informs the essential new work by historian Tyina L. Steptoe . . . This valuable addition to the historiography builds on the literature of race, ethnicity, and migration as well as the growing scholarship on the musical construction of race. Weaving together oral history interviews (some conducted by the author), census data, high school yearbooks, and especially musical recordings, Steptoe amasses a creative source base to tell intimate stories within the broader history of what is today the fourth most populous city in the United States."
— South: A Scholarly Journal

"Employing vivid scholarship and strategic sources on race and ethnicity in Houston through sound, Steptoe successfully proves her vigor as an historian and scholar while simultaneously displaying her skills as a writer."
— Houston Review of Books