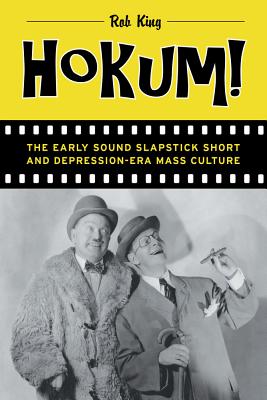 By Rob King
Email or call for price

Hokum! is the first book to take a comprehensive view of short-subject slapstick comedy in the early sound era. Challenging the received wisdom that sound destroyed the slapstick tradition, author Rob King explores the slapstick short’s Depression-era development against a backdrop of changes in film industry practice, comedic tastes, and moviegoing culture. Each chapter is grounded in case studies of comedians and comic teams, including the Three Stooges, Laurel and Hardy, and Robert Benchley. The book also examines how the past legacy of silent-era slapstick was subsequently reimagined as part of a nostalgic mythology of Hollywood’s youth.

Rob King is Associate Professor at Columbia University’s School of the Arts and author of the award-winning The Fun Factory: The Keystone Film Company and the Emergence of Mass Culture.

"King thus explores a series of critical questions about how cultural forms dwindle and reemerge... his work points toward a new avenue of research worth looking into when considering alternative constructions of American film history; instead of breaking down the myths that haunt much of film scholarship, the development of these very myths may reveal more about cultural consciousness."
— Film Quarterly

"King’s approach is thoroughly revisionist, a genre history as grounded in the archive and the trade press as it is in the screening room, one that seeks to dramatically expand which films matter. ... Hokum! is a triumph! King demonstrates what happens in an era of expanded access to archival texts that are now more widely available on DVD, the digitization of trade press reports, and the ongoing refinement of film historiography. At the risk of ending on an unapologetically bad pun, comedy has a new King. "
— Journal for Cinema and Media Studies