The Pyrocene: How We Created an Age of Fire, and What Happens Next (Hardcover) 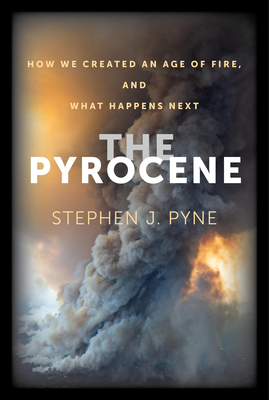 A provocative rethinking of how humans and fire have evolved together over time—and our responsibility to reorient this relationship before it's too late.​

The Pyrocene tells the story of what happened when a fire-wielding species, humanity, met an especially fire-receptive time in Earth's history. Since terrestrial life first appeared, flames have flourished. Over the past two million years, however, one genus gained the ability to manipulate fire, swiftly remaking both itself and eventually the world. We developed small guts and big heads by cooking food; we climbed the food chain by cooking landscapes; and now we have become a geologic force by cooking the planet.

Some fire uses have been direct: fire applied to convert living landscapes into hunting grounds, forage fields, farms, and pastures. Others have been indirect, through pyrotechnologies that expanded humanity's reach beyond flame's grasp. Still, preindustrial and Indigenous societies largely operated within broad ecological constraints that determined how, and when, living landscapes could be burned. These ancient relationships between humans and fire broke down when people began to burn fossil biomass—lithic landscapes—and humanity's firepower became unbounded. Fire-catalyzed climate change globalized the impacts into a new geologic epoch. The Pleistocene yielded to the Pyrocene.

Around fires, across millennia, we have told stories that explained the world and negotiated our place within it. The Pyrocene continues that tradition, describing how we have remade the Earth and how we might recover our responsibilities as keepers of the planetary flame.

Stephen J. Pyne is Professor Emeritus at Arizona State University and author of many books on the history and management of fire, including Fire: A Brief History and Between Two Fires: A Fire History of Contemporary America.

"An excellent grounding in how fire functions, how we think about it and why that matters. In Pyne’s hands, fire becomes more than simply a natural phenomenon."
— Los Angeles Times

"The Pyrocene is his fullest elucidation yet of how humanity has entered a new age of fire, one that redefines the human-altered era of the Anthropocene. And Pyne . . . is certainly the best writer to make this argument."
— Nature

"The Pyrocene may be just the type of analysis that we need to reformulate our understanding of fire and to prepare for the longue duree of a fire age."

"A tremendous read, an incisive account of the history and science of fire alongside the evolution of hominids."
— Organic Gardener