The Promise of the Grand Canyon: John Wesley Powell's Perilous Journey and His Vision for the American West (Hardcover) 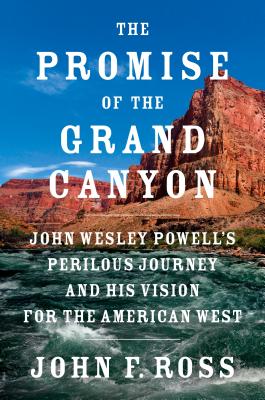 By John F. Ross
$30.00
Possibly out of print. Email or call to check availability and price.

"A bold study of an eco-visionary at a watershed moment in US history."-Nature

A timely, thrilling account of a man who, as an explorer, dared to lead the first successful expedition down the Colorado through the Grand Canyon--and, as an American visionary, waged a bitterly-contested campaign for environmental sustainability in the American West.

When John Wesley Powell became the first person to navigate the entire Colorado River, through the Grand Canyon, he completed what Lewis and Clark had begun nearly 70 years earlier--the final exploration of continental America. The son of an abolitionist preacher, a Civil War hero (who lost an arm at Shiloh), and a passionate naturalist and geologist, in 1869 Powell tackled the vast and dangerous gorge carved by the Colorado River and known today (thanks to Powell) as the Grand Canyon.

With The Promise of the Grand Canyon, John Ross recreates Powell's expedition in all its glory and terror, but his second (unheralded) career as a scientist, bureaucrat, and land-management pioneer concerns us today. Powell was the first to ask: how should the development of the west be shaped? How much could the land support? What was the role of the government and private industry in all of this? He began a national conversation about sustainable development when most everyone else still looked upon land as an inexhaustible resource. Though he supported irrigation and dams, his prescient warnings forecast the 1930s dustbowl and the growing water scarcities of today. Practical, yet visionary, Powell didn't have all the answers, but was first to ask the right questions.

John Ross is a former editor of American Heritage and an adventure writer with extensive whitewater experience. His previous books are Enduring Courage: Ace Pilot Eddie Rickenbacker and the Dawn of the Age of Speed and War on the Run: The Epic Story of Robert Rogers and the Conquest of America's First Frontier, which won the Fort Ticonderoga Award for Contributions to American History.

"Ross tells Powell’s story powerfully, sprinkled with quotes from the explorer-geologist’s diary and a feeling of dramatic suspense — will he survive? — even though we know the outcome."
―The Washington Post

"A convincing case for Powell’s legacy as a pioneering conservationist who maintained, ahead of his time and to no avail, that future settlement of the West must take into account the region’s essential aridity."
―The Wall Street Journal

"A bold study of an eco-visionary at a watershed moment in US history."
―Nature

"Ross's portrait of this complicated figure reveals how 'generations of dueling developers and environmentalists have claimed [Powell] as their guiding star.'"
―Sierra Magazine

“[Powell] was — or ought to have become — a Great American Hero up there with the Founding Fathers. Now he has been handsomely rescued from neglect, if not oblivion . . . Powell lived an ungainly life, and John F. Ross has brought order to it in this engaging biography . . . This is a biography, pure and complex, the recounting of an extraordinary life and trailblazing career . . . Ross evokes bone-chilling, palm-wrinkling, stomach-curdling whitewater rapids.”
―The Washington Times

"This interesting volume is a self-contained story of the life of John Wesley Powell, highlighting his many battles, political and otherwise, to bring the value and potential of the American West to the attention of his government and fellow citizens."
―NY Journal of Books

"John Ross has done a spectacular job of research and reportage to bring this book to print.”
―Aspen Daily News

"Ross reminds us of the potential nobility of public service and how government officials who stay true to science are, indeed, heroic."
―Washington Independent Review of Books

“Ross makes vivid Powell’s adventures, drawing on journals and contemporary accounts, even capturing the drama of vicious battles among scientists vying for federal funds, including Powell’s clashes with senators and bureaucrats, in this fascinating portrait.”
―Booklist

“This enthralling tale by adventure writer Ross focuses on the life of John Wesley Powell (1834–1902), an explorer, geologist, and early proponent of environmental sustainability . . . Ross displays a flair for adventure writing as he recounts Powell’s service with the Union Army during the Civil War (which cost him half an arm) and subsequent work on geological surveys of the West, and he renders Powell’s 1869 expedition of the Colorado River and the Grand Canyon in breathtaking detail . . . Ross demonstrates a facility for both human history and natural history, clearly showing why Powell’s ideas matter today.”
―Publishers Weekly

“John Wesley Powell was not just a great explorer—he was the great prophet of the arid West whose vision is now coming true in a dusty era of drought and wildfire. This book reminds us to pay attention to savvy people, not to our preferred dreams and delusions—in that sense it couldn’t be more timely.”
―Bill McKibben, author of The End of Nature

"Powell was famous in his day as the first Anglo explorer to travel the length of the Colorado River...His voyages down that wild watercourse are the stuff of legend...Ross' view through the lens of the unfolding [climate change] crisis lends Powell and his arguments new relevance.”
―Kirkus Reviews

"A long overdue look at the meaning of the American West and the critical environmental partnership between land and people. John Ross has enriched our understanding of Powell’s explorations and our turbulent legacy to protect what remains."
―Linda Lear, author of Rachel Carson: Witness for Nature

"John Ross offers a stunning re-creation of John Wesley Powell's heroic journey down the Colorado River. It's an epic adventure that forever transformed the American West."
―Douglas Brinkley, author of The Wilderness Warrior

“Fast-paced . . . With just the right amount of technical detail, Mr. Ross evocatively captures the excitement of the racetrack, where the driver had to contend with 'gumbo'-thick clouds of dust and gravel thrown up by the wheels. . . . Mr. Ross's book does an excellent job portraying how the reality of air combat differed from the romantic notions, advanced at the time, of a noble contest between modern knights in the sky.”―Wall Street Journal

Praise for War on the Run

“A lively, evocative and at times moving biography . . . Ross [brings] this extraordinary man back to life.”—The Wall Street Journal