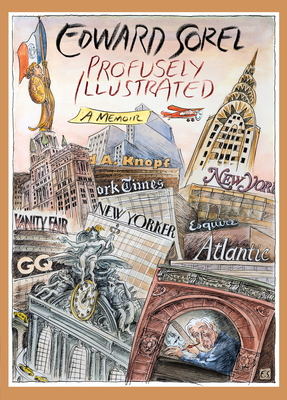 The fabulous life and times of one of our wittiest, most endearing and enduring caricaturists—in his own words and inimitable art. Sorel has given us "some of the best pictorial satire of our time ... [his] pen can slash as well as any sword” (The Washington Post).

Alongside more than 172 of his drawings, cartoons, and caricatures—and in prose as spirited and wickedly pointed as his artwork—Edward Sorel gives us an unforgettable self-portrait: his poor Depression-era childhood in the Bronx (surrounded by loving Romanian immigrant grandparents and a clan of mostly left-leaning aunts and uncles); his first stabs at drawing when pneumonia kept him out of school at age eight; his time as a student at New York’s famed High School of Music and Art; the scrappy early days of Push Pin Studios, founded with fellow Cooper Union alums Milton Glaser and Seymour Chwast, which became the hottest design group of the 1960s; his two marriages and four children; and his many friends in New York’s art and literary circles.

As the “young lefty” becomes an “old lefty,” Sorel charts the highlights of his remarkable life, by both telling us and showing us how in magazines and newspapers, books, murals, cartoons, and comic strips, he steadily lampooned—and celebrated—American cultural and political life. He sets his story in the parallel trajectory of American presidents, from FDR’s time to the present day—with the candor and depth of insight that could come only from someone who lived through it all.

In Profusely Illustrated, Sorel reveals the kaleidoscopic ways in which the personal and political collide in art—a collision that is simultaneously brilliant in concept and uproarious and beautiful in its representation.

EDWARD SOREL’s work has appeared in many, many places, among them Vanity Fair, The Atlantic, The Nation, and The New Yorker, for which he has done numerous covers. He lives in New York in the apartment that he shared with his wife and sometime writing partner, Nancy Caldwell Sorel.

"Sorel's Profusely Illustrated manages to fuse art and autobiography with an unusual warmth and panache. Meant to be a 'portfolio' of his best illustrations, cartoons, caricatures, and magazine covers, it also describes his 'remarkably unremarkable life.' But Sorel is much too modest about his accomplishments. Over the past 60 years or so, he has given us some of the most original, biting, funny, and disturbing caricatures that anyone in this country has ever produced." —Jerome Charyn, The American Scholar

“Warm, affectionate, often angry but never cruel, cynical but not without a certain faith in people, Sorel gives us a life—and a world—in pictures. It made me very happy.” —Sadie Stein, The New York Times Book Review

“One of my favorite caricaturists and illustrators, Edward Sorel, provides fans like me an overview of his life as a New Yorker [and] a freelance artist . . . His pen aligned with his wit to create unforgettable visual interpretations of everyone from Ed Koch to Ronald Reagan [as well as] loving caricatures of many Hollywood greats. . . All I can say to Sorel is: Please don’t stop!”
—Leonard Maltin, film critic

“Breezy, funny and self-deprecating . . . Sorel is refreshingly candid about his amazement over and gratitude for his happy productive life combating greed, corruption, lies, hubris, and crimes against humanity with wit and artistic vigor, righteous outrage, and ebullient creativity. . . . He has also created an exuberant, on-the-page retrospective exhibition of his imaginative, vital, mischievous and daring magazine work.” —Donna Seaman, Booklist (starred review)

“A colorfully entertaining self-portrait conveyed through pithy prose and vital artwork . . . [Sorel] examines the many ways in which politics has influenced his work, propelling him to astutely express his perspectives through brilliant (and often scathing) works of pen-and-ink art. He also weaves in engaging discussions of his sharp-witted, biting commentary on a succession of more controversial, ‘unconstitutional’ American presidents, from Nixon to Trump . . . As a sharp cultural observer and an enticing raconteur, the author shines throughout his entertaining anecdotes and unique artwork. Fans of Sorel’s storied artistry will welcome this generously illustrated centerpiece.” —Kirkus Reviews

“A Swiftian appraisal of the insanity of our time.” —Al Hirschfeld

“Edward Sorel is the United States’ best political cartoonist . . .Each illustration is rich with the artist’s indulgent line and ironicuse of shadow, which convey the complexity of human foiblesbetter than almost anybody.” —Los Angeles Review of Books

“Who would figure that Mary Astor’s life would provide such entertaining reading, but in Sorel’s colloquial eccentric style, the tale he tells is juicy, funny, and in the end touching . . . A terrific book he illustrates with his wonderful caricature drawings.” —The New York Times Book Review (cover)