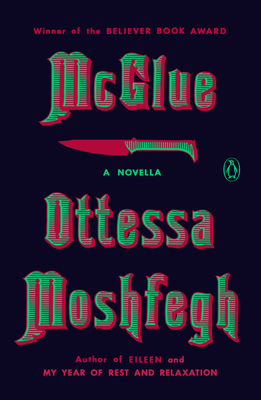 The debut novella from one of contemporary fiction's most exciting young voices, now in a new edition.

Salem, Massachusetts, 1851: McGlue is in the hold, still too drunk to be sure of name or situation or orientation--he may have killed a man. That man may have been his best friend. Intolerable memory accompanies sobriety. A-sail on the high seas of literary tradition, Ottessa Moshfegh gives us a nasty heartless blackguard on a knife-sharp voyage through the fogs of recollection.

They said I've done something wrong? . . . And they've just left me down here to starve. They'll see this inanition and be so damned they'll fall to my feet and pass up hot cross buns slathered in fresh butter and beg I forgive them. All of them . . . : the entire world one by one. Like a good priest I'll pat their heads and nod. I'll dunk my skull into a barrel of gin.

Ottessa Moshfegh is a fiction writer from New England. Eileen, her first novel, was shortlisted for the National Book Critics Circle Award and the Man Booker Prize, and won the PEN/Hemingway Award for debut fiction. She is also the author of My Year of Rest and Relaxation, and the short story collection Homesick for Another World. Her stories have been published in The Paris Review, The New Yorker, Granta, and have earned her a Pushcart Prize, an O. Henry Award, the Plimpton Discovery Prize, and a grant from the National Endowment for the Arts. Her first book, McGlue, a novella, won the Fence Modern Prize in Prose and the Believer Book Award.

“A scion of Nathaniel Hawthorne and Raymond Carver at once, Moshfegh transforms a poison into an intoxicant.” —Rivka Galchen

“Reads like the swashbuckledspray of a slit throat—immediate, visceral, frank, unforgiving,violent, and grotesquely beautiful . . . McGlue has the urgency of short fiction married with the grandiosity of an epic at-sea classic.” —Los Angeles Review of Books

“[Moshfegh] is a writer’s writer, and one of the most multitalentednew voices to come along in years. . . . In McGlue, Moshfegh’s facility with voice (here she’s inhabiting that of a nineteenth-century scoundrel) competes with her ability toexpose the gritty, mucky corners of the human condition . . . Her prose is breathtaking, inventive, and electric.” —Bustle

"This book is not really a book; it’s a prayer and a miracle. Ottessa Moshfegh is a conjurer of the highest order, and McGlue, a short novel about a person named McGlue who might be a murderer, makes me feel in love with the world, and so grateful to be alive." —Patty Yumi Contrell, author of Sorry to Disturb the Peace

“A splashy new edition . . . Moshfegh's first book introduces the kind of character, in all his psychological wildness and vivid grotesquerie that her others are known for, and readers will be more than intrigued.” —Booklist

“Moshfegh’s fiction often fetishizes the repellent (vomit, blood, our capacity for callously using each other), but in time McGlue’s tale acquires tenderness of a sort. That’s partly thanks to Moshfegh’s lyricism . . . A potent, peculiar, and hallucinatory anti-romance.” —Kirkus Reviews