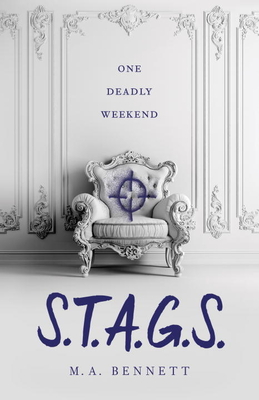 By M. A. Bennett
$18.99
Possibly out of print. Email or call to check availability and price.

"Like Mean Girls, but British and deadly. . . . This book is great, from start to finish." --Hypable

Get ready for one deadly weekend in this twisting thriller for fans of Pretty Little Liars and One of Us is Lying that explores just how far the elite at an English boarding school will go.

Greer MacDonald has just started as a scholarship student at the exclusive St. Aidan the Great boarding school, known to its privileged pupils as STAGS. STAGS is a place where new things--and new people--are to be avoided. And in her first days there, Greer is ignored at best and mocked at worst by the school's most admired circle of friends, the Medievals.

So, naturally, Greer is taken by surprise when the Medievals send her an invitation to a sought-after weekend retreat at the private family estate of their unofficial leader, Henry de Warlencourt. It's billed as a weekend of "huntin' shootin' fishin'."

As the weekend begins to take shape, it becomes apparent that beyond the luxurious trappings, predators are lurking, and they're out for blood.

OPTIONED FOR FILM BY FOX 2000 AND CHERNIN ENTERTAINMENT--WITH HUNGER GAMES CO-WRITER TO ADAPT!

"Reinvigorates the boarding-school thriller." --The Guardian

M. A. Bennett is half Venetian and was born in Manchester, England, and raised in the Yorkshire Dales. She is a history graduate of Oxford University and the University of Venice, where she specialized in the study of Shakespeare's plays as a historical source. After university she studied art and has since worked as an illustrator, an actress, and a film reviewer. She also designed tour visuals for rock bands, including U2 and the Rolling Stones. She was married on the Grand Canal in Venice and lives in north London with her husband, son, and daughter. Follow her at @MABennettAuthor on Twitter and at m.a.bennettauthor on Instagram.

"Reinvigorates the boarding-school thriller." --The Guardian

"Bennett creates a chilling atmosphere on every page. Reads like a Sir Arthur Conan Doyle or an Agatha Christie mystery for modern teens . . . .[a] suspenseful study of British Aristocracy." —SLJ