The Big Picture: On the Origins of Life, Meaning, and the Universe Itself (Hardcover) 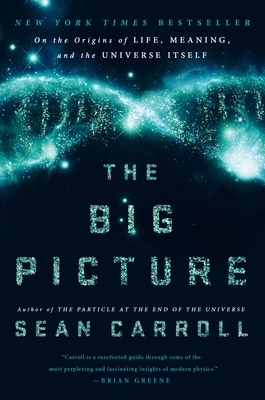 The instant New York Times bestseller about humanity's place in the universe—and how we understand it.

Already internationally acclaimed for his elegant, lucid writing on the most challenging notions in modern physics, Sean Carroll is emerging as one of the greatest humanist thinkers of his generation as he brings his extraordinary intellect to bear not only on Higgs bosons and extra dimensions but now also on our deepest personal questions: Where are we? Who are we? Are our emotions, our beliefs, and our hopes and dreams ultimately meaningless out there in the void? Do human purpose and meaning fit into a scientific worldview?

In short chapters filled with intriguing historical anecdotes, personal asides, and rigorous exposition, readers learn the difference between how the world works at the quantum level, the cosmic level, and the human level—and then how each connects to the other. Carroll's presentation of the principles that have guided the scientific revolution from Darwin and Einstein to the origins of life, consciousness, and the universe is dazzlingly unique.

Carroll shows how an avalanche of discoveries in the past few hundred years has changed our world and what really matters to us. Our lives are dwarfed like never before by the immensity of space and time, but they are redeemed by our capacity to comprehend it and give it meaning.

The Big Picture is an unprecedented scientific worldview, a tour de force that will sit on shelves alongside the works of Stephen Hawking, Carl Sagan, Daniel Dennett, and E. O. Wilson for years to come.

SEAN CARROLL is a theoretical physicist at the California Institute of Technology. He received his PhD in 1993 from Harvard University. Recently, Carroll has worked on the foundations of quantum mechanics, the arrow of time, and the emergence of complexity. He has been awarded prizes and fellowships by the National Science Foundation, NASA, the Alfred P. Sloan Foundation, the David and Lucile Packard Foundation, the American Physical Society, the American Institute of Physics, and the Royal Society of London. His most recent award, in 2014, was from the Freedom From Religion Foundation. Carroll has appeared on The Colbert Report (twice), PBS’s NOVA, and Through the Wormhole with Morgan Freeman, and he frequently serves as a science consultant for film and television. He has been interviewed by various NPR shows, Scientific American, Wired, and The New York Times. He has given a TED talk on the multiverse that has more than one million views, and he has participated in a number of well-attended public debates concerning material in his new book, including one in New York City in 2014 with Eben Alexander.

“Weaving the threads of astronomy, physics, chemistry, biology, and philosophy into a seamless narrative tapestry, Sean Carroll enthralls us with what we’ve figured out in the universe and humbles us with what we don’t yet understand. Yet in the end, it’s the meaning of it all that feeds your soul of curiosity.”—Neil deGrasse Tyson, host of Cosmos: A Spacetime Odyssey

“With profound intelligence and lucid, unpretentious language, Sean Carroll beautifully articulates the worldview suggested by contemporary naturalism. Thorny issues like free will, the direction of time, and the source of morality are clarified with elegance and insight. The Big Picture shows how the scientific worldview enriches our understanding of the universe and ourselves. A reliable account of our knowledge of the universe, it is also a serene meditation on our need for meaning. This is a book that should be read by everybody.”—Carlo Rovelli, author of Seven Brief Lessons on Physics

“Never hectoring, always tolerant, the author presents a seductively attractive picture of a universe whose ultimate laws lie within our grasp....[Carroll] gives us a highly enjoyable and lucid tour through a wide range of topics....Even if you don’t agree with what he says, you are unlikely to be enraged by such an urbane and engaging lecturer; more likely, you will be enthralled.”—The Wall Street Journal

“A nuanced inquiry into ‘how our desire to matter fits in with the nature of reality at its deepest levels,’ in which Carroll offers an assuring dose of what he calls ‘existential therapy’ reconciling the various and often seemingly contradictory dimensions of our experience.”—Maria Popova, Brain Pickings

“[The Big Picture is] a tour de force that offers a comprehensive snapshot of the human situation in our infinitely strange universe, and it does this with highly accessible language and engaging storytelling.”—Salon

“Sean Carroll’s holistic vision accommodates the sciences and the humanities and has a high probability of provoking readers into clarifying their own views about the complex relations among science, religion, and morality.”—The Times Literary Supplement

“The Big Picture impresses. Carroll is a lively and sympathetic author who writes as well about biology and philosophy as he does about his own field of physics.”—Financial Times

“Carroll is the perfect guide on this wondrous journey of discovery. A brilliantly lucid exposition of profound philosophical and scientific issues in a language accessible to lay readers.”—Kirkus Reviews (starred review)

"Carroll presents a means through which people can better understand themselves, their universe, and their conceptions of a meaningful life.”—Publishers Weekly

“Guides us through several centuries’ worth of scientific discoveries to show how they have shaped our understanding and indeed how the laws of nature are linked to the most fundamental human questions of life, death, and our place in the cosmos.”—Library Journal
“Intensely insightful.”—Scientific American

“With its delightful blend of evocative love paens and four-dimensional integrals, The Big Picture offers a uniquely physical vision of life's meaning. This is poetry.”—Physics Today

“[Carroll] sets out to show how various phenomena, including thought, choice, consciousness, and value, hang together with the scientific account of reality that has been developed in physics in the past 100 years. He attempts to do all this without relying on specialized jargon from philosophy and physics and succeeds spectacularly in achieving both aims.”—Science

“True to the grand scope of its title....Anyone who enjoys asking big questions will find a lot to consider.”—Booklist

“From the big bang to the meaning of human existence, The Big Picture is exactly that—a magisterial, yet deeply fascinating, grand tour through the issues that really matter. Blending science and philosophy, Sean Carroll gives us a humane perspective on the universe and our place in it. As gripping as it is important, The Big Picture can change the way you think about the world.”—Neil Shubin, author of Your Inner Fish

“In this timely exploration of the universe and its mysteries—both physical and metaphysical—Sean Carroll illuminates the world around us with clarity, beauty and, ultimately, with much needed wisdom.”—Deborah Blum, director of the Knight Science Journalism Program at MIT and author of The Poisoner’s Handbook

“Sean Carroll is a leading theoretical cosmologist with the added ability to write about his subject with unusual clarity, flare, and wit.”—Alan Lightman, author of The Accidental Universe and Einstein’s Dreams

“Until now you might have gotten away believing modern physics is about things either too small or too far away to care much about. But no more. Sean Carroll’s new book reveals how physicists’ quest to better understand the fundamental laws of nature has led to astonishing insights into life, the universe, and everything. Above all, a courageous book, and an overdue one.”—Sabine Hossenfelder, Frankfurt Institute for Advanced Studies

“Instead of feeling humbled and insignificant when gazing upward on a clear starry night, Carroll takes us by the hand and shows us how fantastic the inanimate physical universe is and how special each animate human can be. It is lucid, spirited, and penetrating.”—Michael S. Gazzaniga, author of Who's in Charge? and Tales from Both Sides of the Brain

“Sean Carroll’s lucid The Big Picture reveals how the universe works and our place in it. Carroll, a philosophically sophisticated physicist, discusses consciousness without gimmicks, and deftly shows how current physics is so solid that it rules out ESP forever.”—Steven Pinker, author of The Better Angels of Our Nature