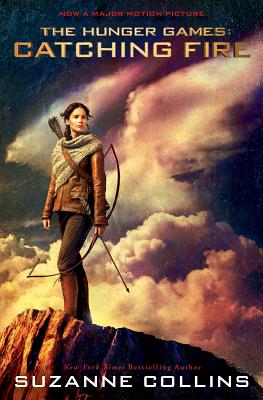 By Suzanne Collins
$12.99
Possibly out of print. Email or call to check availability and price.

This is book number 2 in the Hunger Games series.

Catching Fire, the second book in the New York Times bestselling Hunger Games series, is now available with all-new cover art from the feature film!The second book in the international bestselling Hunger Games series is now a feature film. Here is the original novel with exciting new movie artwork on the cover. (Original cover version also available.)Against all odds, Katniss Everdeen has won the annual Hunger Games with fellow district tribute Peeta Mellark. But it was a victory won by defiance of the Capitol and their harsh rules. Katniss and Peeta should be happy. After all, they have just won for themselves and their families a life of safety and plenty. But there are rumors of rebellion among the subjects, and Katniss and Peeta, to their horror, are the faces of that rebellion. The Capitol is angry. The Capitol wants revenge.

Suzanne Collins is the author of the groundbreaking Hunger Games trilogy for young adults: The Hunger Games, Catching Fire, and Mockingjay. She is also the author of the picture book Year of the Jungle, a Publishers Weekly Best Book of the Year, and the New York Times bestselling Underland Chronicles series for middle-grade readers, which started with Gregor the Overlander. Suzanne lives with her family in Connecticut. You can find her online at suzannecollinsbooks.com.