Deep: Freediving, Renegade Science, and What the Ocean Tells Us about Ourselves (Hardcover) 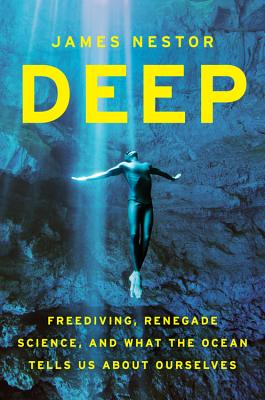 By James Nestor
$27.00
Possibly out of print. Email or call to check availability and price.

While on assignment in Greece, journalist James Nestor witnessed something that confounded him: a man diving 300 feet below the ocean’s surface on a single breath of air and returning four minutes later, unharmed and smiling.

This man was a freediver, and his amphibious abilities inspired Nestor to seek out the secrets of this little-known discipline. In Deep, Nestor embeds with a gang of extreme athletes and renegade researchers who are transforming not only our knowledge of the planet and its creatures, but also our understanding of the human body and mind. Along the way, he takes us from the surface to the Atlantic’s greatest depths, some 28,000 feet below sea level. He finds whales that communicate with other whales hundreds of miles away, sharks that swim in unerringly straight lines through pitch-black waters, and seals who dive to depths below 2,400 feet for up to eighty minutes—deeper and longer than scientists ever thought possible. As strange as these phenomena are, they are reflections of our own species’ remarkable, and often hidden, potential—including echolocation, directional sense, and the profound physiological changes we undergo when underwater. Most illuminating of all, Nestor unlocks his own freediving skills as he communes with the pioneers who are expanding our definition of what is possible in the natural world, and in ourselves.

JAMES NESTOR has written for Outside Magazine, Men's Journal, Dwell Magazine, the New York Times, San Francisco Magazine, Interior Design, the San Francisco Chronicle, and numerous other publications. His longform piece "Half-Safe," about the only around-the-world journey by land and sea in the same vehicle ever attempted (and completed), was published by The Atavist. Nestor lives in San Francisco and is a member of the San Francisco Writers' Grotto.

iTunes Top 20 Books of the Month

BBC Book of the Week

The Week Book of the Week

“The deeper the book ventures into the ocean, the more dramatic and unusual the organisms therein and the people who observe them…Through [Nestor's] eyes and his stories, it’s a journey well worth taking.”
— David Epstein, New York Times Book Review

"Fascinating, informative, exhilarating book, and, I wager, it will at the very least have you testing how long you can hold your breath."
—Wall Street Journal


"An engaging exploration of the depths of the world's oceans and the human connection to the rapidly changing world below. This is popular science writing at its best."
—Christian Science Monitor


"Rich and illuminating ... A passionate celebration of the possible and the unproven ... [Deep] will certainly enrich the thinking of anyone planning to spend time at the beach."
—Independent (UK)


"Truly breathtaking ... Nestor gets right in with the competitors and rogue scientists who are unearthing mysteries of the deep and its inhabitants that we can't even imagine, in a book that's engaging and eye-popping."
—Esquire


"Nestor is crisp with his fun, seafaring facts; he is sober with his sprinkling of environmental bulletins. The book neverpreaches, and it’s a zippy read."
—Los Angeles Times


"Freediving, the sport that harnesses the mammalian dive reflex to survive deep plunges, can be a boon for marine researchers, avers James Nestor. We meet a salty cast of them, such as the 'aquanauts' of Aquarius, a marine analogue of the International Space Station submerged off the Florida Keys. Equally mesmeric are Nestor's own adventures, whether spotting bioluminescent species from a submarine in the bathypelagic zone, or freediving himself — and voyaging into humanity's amphibious origins in the process."
—Nature (UK)


"Put Deep at the top of your reading list. This book will do for the oceans what Cosmos did for space. It's mind-bending, intrepid, and inspiring."
—Po Bronson


"With verve and humor, the author describes his own risk-taking attempts to understand the ocean's ancient secrets and future potential and the daring and brilliant people who have dedicated their lives to probing deeper ... [Nestor's] writing is sharp, colorful, and thrilling ... Bring[s] the ocean to life from a research perspective as well as a human one. An adventurous and frequently dazzling look at our planet's most massive habitat."
— Kirkus


"A thrilling account, made timely by the rapidly changing state of earth’s most expansive environment." —Publishers Weekly