Take Me Out: A Play (Paperback) 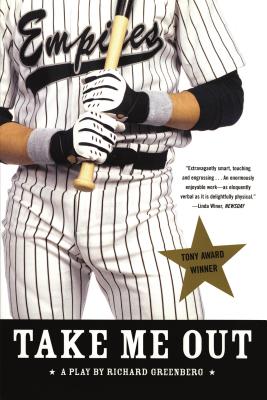 "A funny and troubling look at athletes and identity . . . Take Me Out is a dynamic, involving play." —Donald Lyons, New York Post

Darren Lemming is the star center fielder for the champion New York Empires. An extraordinary athlete, he fills both his fans and his teammates with awe at his abilities and his presence on the field and off. When he makes the matter-of-fact announcement that he's gay, he throws his team into turmoil and confusion, while he also emboldens his closeted accountant, Mason Marzac, to come to terms with his own sexuality—and to fully experience the pure joy of watching great athletes play a sport as well as it can be played. But Darren's announcement brings to the fore the confused and twisted hostilities of the Empires' brilliantly talented but deeply racist and homophobic pitcher, Shane Mungitt—from whose rage tragic consequences ensue.

The American premiere of Take Me Out took place at the Public Theater in New York City in September 2002. It later moved to the Walter Kerr Theatre on Broadway in February 2003.

Richard Greenberg is an American playwright and television writer known for his subversively humorous depictions of middle-class American life. He has had more than 25 plays premiere on and off-broadway in New York City and eight at Los Angeles' South Coast Repertory Theatre, including The Violet Hour, Everett Beekin, and Hurrah at Last. Greenberg is perhaps best known for his 2003 Tony Award winning play, Take Me Out about the conflicts that arise after a Major League Baseball player nonchalantly announces to the media that he is gay. The play premiered first in London and then traveled to New York as the first collaboration between England's Donmar Warehouse and New York's Public Theater. After its Broadway transfer in early 2003, Take Me Out won widespread critical acclaim for Greenberg and numerous prestigious awards.

“Greenberg intoxicates us with his words in the same way he's intoxicated by the game. [Take Me Out] achieves a lyrical power to match the beauty of . . . either a sublime piece of music or an exquisitely made double play. Or both.” —Charles Isherwood, Variety