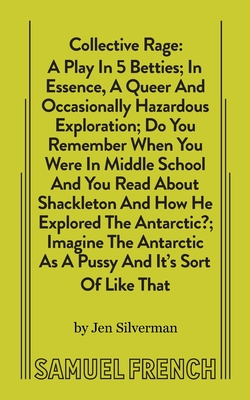 By Jen Silverman
Email or call for price

Betty is rich; Betty is lonely; Betty's busy working on her truck; Betty wants to talk about love, but Betty needs to hit something. And Betty keeps using a small hand mirror to stare into parts of herself she's never examined. Five different women named Betty collide at the intersection of anger, sex, and the "thea-tah."

Jen Silverman is a New York-based writer. Born in the U.S., she was raised across the U.S., Europe and Asia. Her theatre work includes THE MOORS (Yale Repertory Theatre premiere, off-Broadway with The Playwrights Realm, Susan Smith Blackburn finalist); THE ROOMMATE (Actor’s Theatre of Louisville Humana world premiere, multiple regional productions including South Coast Rep, SF Playhouse and Williamstown Theatre Festival, upcoming at Steppenwolf); PHOEBE IN WINTER (Off-off Broadway with Clubbed Thumb); COLLECTIVE RAGE: A PLAY IN 5 BETTIES (Woolly Mammoth premiere); and ALL THE ROADS HOME, a play with songs (Cincinnati Playhouse in the Park premiere). Jen is a member of New Dramatists, a Core Writer at the Playwrights Center in Minneapolis, an affiliated artist with SPACE on Ryder Farm, and has developed work with the O’Neill, New York Theatre Workshop, Playpenn, Portland Center Stage, The Ground Floor Residency at Berkeley Rep, and the Royal Court in London among other places. She’s a two-time MacDowell fellow, recipient of a New York Foundation for the Arts grant, the Helen Merrill Award, an LMCC Fellowship, and the Yale Drama Series Award. She was the 2016-2017 Playwrights of New York (PoNY) Fellow at the Lark. Jen has a two-book deal with Random House for a collection of stories (THE ISLAND DWELLERS, pub date May 1, 2018) and a novel. Education: Brown, Iowa Playwrights Workshop, Juilliard. More info: www.jensilverman.com

Betty is rich; Betty is lonely; Betty’s busy working on her truck; Betty wants to talk about love, but Betty needs to hit something. And Betty keeps using a small hand mirror to stare into parts of herself she’s never examined. Five different women named Betty collide at the intersection of anger, sex, and the “thea-tah.”
REVIEWS

"[...] a perfect balance between the really absurd and the absurdly real." - Broadway World, Read More

"Told with a singular, wholly original voice that evokes Albee, Suzan Lori-Parks, and even the poetic lyricism of Ntozake Shange. And it is very, very funny." - DC Metro Theater Arts, Read More

"Five Stars! [...] this evocative and explosive exploration of women, relationships, love, and above all - p***y - will rock your world from the time the first of the quintet of Betty Boops are introduced through to the sentimental, albeit bizarre, ending." - TheatreBloom