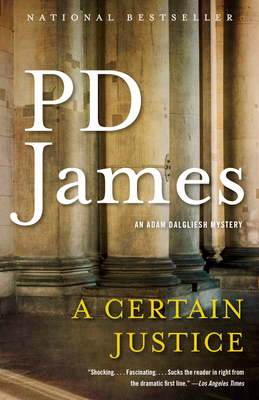 This is book number 10 in the Adam Dalgliesh series.

When distinguished criminal lawyer Venetia Aldridge defends a young man for the brutal murder of his mother, she views the case as simply another opportunity to demonstrate her brilliance in the courtroom. But within weeks of the trial Aldridge is found dead at her desk, a bloodstained barrister’s wig on her head. And as Commander Adam Dalgliesh of Scotland Yard attempts to make sense of events, the murders continue, inexorably spiraling into fresh complexities of horror.

P. D. James was the author of twenty-one books, many of which feature her detective hero, Adam Dalgliesh, and have been televised or filmed. She was the recipi­ent of many honors, including the Mystery Writers of America Grand Master Award and the National Arts Club Medal of Honor for Literature. In 1991 she was created Baroness James of Holland Park. She died in 2014 at the age of ninety-four.

“A complex, gripping story. . . . It has the trademark virtues of James’s fictions: a dense weave of characters, a careful, winding plot, and above all a richly evoked sense of place.” —Newsday

“Certain to entertain you . . . a tale well worth reading.” —Chicago Tribune

“This is a P. D. James case to shiver through and revel in—dark page by dark page.” —Atlanta Journal-Constitution

“As always, James proves to be a masterful storyteller . . . she remains as intrigued by the mysteries of the human condition as she is by the intricacies of detection.” —The Seattle Post-Intelligencer

“Another winner. . . . In what may be the best of her Dalgliesh series, James creates a gallery of memorable characters and furnishes them with a complex yet convincing story, gracefully told.” —The San Diego Union-Tribune

“A P. D. James mystery moves with stately dignity, gathering force, offering circumstance and biography, intricately linked means and motivations, quick horrors, the boredom of routine, the inevitability of tragedy, the implacable power of the past.” —Detroit News Free Press

“The incomparable James is at the top of her form. . . . [She] interweaves crimes old and new in this brilliantly plotted novel that depicts the many faces of the human psyche and contemplates the question, ‘What is justice?’” —Library Journal

“The most electric opening of any of James’s novels.” —Kirkus Reviews (starred review)