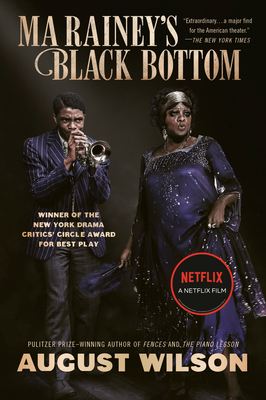 By August Wilson
$13.00
Possibly out of print. Email or call to check availability and price.

From the Pulitzer Prize-winning author of Fences and The Piano Lesson comes the extraordinary Ma Rainey's Black Bottom—winner of the New York Drama Critics' Circle Award for Best Play.

The time is 1927. The place is a run-down recording studio in Chicago. Ma Rainey, the legendary blues singer, is due to arrive with her entourage to cut new sides of old favorites. Waiting for her are her Black musician sidemen, the white owner of the record company, and her white manager. What goes down in the session to come is more than music. It is a riveting portrayal of black rage, of racism, of the self-hate that racism breeds, and of racial exploitation.

“The play’s themes are not new to the stage...the black American search for identity...and the process by which any American sells his soul for what Arthur Miller calls the salesman's dream. Mr. Wilson's style, however, is all his own.... He has lighted a dramatic fuse that snakes and hisses through several anguished eras of American life. When the fuse reaches its explosive final destination, the audience is impaled by the impact.”—Frank Rich, The New York Times

“Extraordinary! Ma Rainey rides on the exultant notes of the blues!”—Jack Kroll, Newsweek

“What a joy! Brilliant...explosive! One of the most dramatically riveting plays I’ve seen in years. You must see it!”—William A Raidy, Newhouse newspapers

“A genuine work of art.”—Brendan Gill, The New Yorker