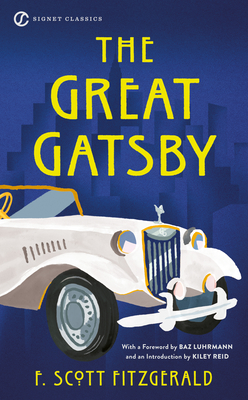 A masterpiece of 20th century literature from F. Scott Fitzgerald, the preeminent chronicler of the Jazz Age--a term he coined.

This classic work encapsulating the decadence and excess of the 1920s "Jazz Age" follows the unassuming Nick Carraway on his search for the American Dream, which leads him to the doorstep of Jay Gatsby, an enigmatic millionaire known for both his lavish parties and his undying love for Nick's cousin, the married Daisy Buchanan. With a mixture of envy and dismay, Nick observes Gatsby and his flamboyant life in the Long Island town of West Egg, while Gatsby yearns for Daisy and all that shimmers across the Sound in East Egg. The result is a chronicle of the drama and deceit that swirl around the lives of the wealthy, which cemented Fitzgerals's reputation as the voice of his generation.

F. Scott Fitzgerald (1896-1940) is widely considered the poet laureate of the Jazz Age and one of the great American authors of the 20th century. He became an instant literary sensation with his first novel, This Side of Paradise, published in 1920. His reputation as the voice of his generation was solidified with his succeeding novels, The Beautiful and Damned (1922), The Great Gatsby (1925) and Tender is the Night (1934). In addition, Fitzgerald was a master of the short story, publishing more than 150 in his short lifetime. In financial straits due to a lifetime of alcoholism and the declining popularity of his works, Fitzgerald secured a Hollywood contract to work on screenplays, including writing some unused dialogue for "Gone With the Wind." His best work during this time was a series of short stories collected as "The Pat Hobby Stories," in which he satirized the Hollywood hack writer. At the time of his death from a heart attack at age 44, he was working on his final novel, which was edited by his close friend, the literary critic by Edmund Wilson, and published posthumously as The Last Tycoon.