Run Towards the Danger: Confrontations with a Body of Memory (Hardcover) 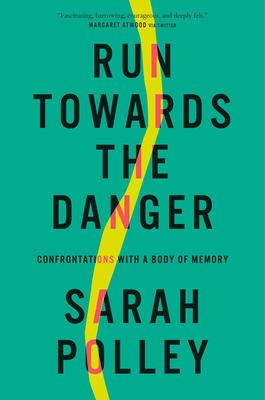 Oscar-nominated screenwriter, director, and actor Sarah Polley’s Run Towards the Danger explores memory and the dialogue between her past and her present

These are the most dangerous stories of my life. The ones I have avoided, the ones I haven’t told, the ones that have kept me awake on countless nights. As these stories found echoes in my adult life, and then went another, better way than they did in childhood, they became lighter and easier to carry.

Sarah Polley’s work as an actor, screenwriter, and director is celebrated for its honesty, complexity, and deep humanity. She brings all those qualities, along with her exquisite storytelling chops, to these six essays. Each one captures a piece of Polley’s life as she remembers it, while at the same time examining the fallibility of memory, the mutability of reality in the mind, and the possibility of experiencing the past anew, as the person she is now but was not then. As Polley writes, the past and present are in a “reciprocal pressure dance.”

Polley contemplates stories from her own life ranging from stage fright to high-risk childbirth to endangerment and more. After struggling with the aftermath of a concussion, Polley met a specialist who gave her wholly new advice: to recover from a traumatic injury, she had to retrain her mind to strength by charging towards the very activities that triggered her symptoms. With riveting clarity, she shows the power of applying that same advice to other areas of her life in order to find a path forward, a way through. Rather than live in a protective crouch, she had to run towards the danger.

In this extraordinary book, Polley explores what it is to live in one’s body, in a constant state of becoming, learning, and changing.

Sarah Polley is an Academy Award–nominated screenwriter, director, and actor. After making short films, Polley made her feature-length directorial debut with the drama film Away from Her in 2006. Polley received an Oscar nomination for the screenplay, which she adapted from the Alice Munro story “The Bear Came Over the Mountain.” Her other projects include the documentary film Stories We Tell (2012), which won the New York Film Critics Circle prize and the National Board of Review award for best documentary; the miniseries adaptation of Margaret Atwood’s novel Alias Grace (2017); and the romantic comedy Take This Waltz (2011). Polley began her acting career as a child, starring in many productions for film and television.

“From the outside, Polley seemed like that rare thing—a child actor who made the impossible leap to mature artistry. The lived reality proved to be another story. Now Polley has published Run Towards the Danger, a roving, psychologically probing memoir in essays . . . On the page, Polley turns out to be as brave, funny, and unself-serious as she is on the screen.” —Alexandra Schwartz, The New Yorker

“The journey from child to child actor to director to mother gives the book its shape, but like the best essayists, Polley takes intricate, illuminating detours. And like her films, Run Towards the Danger explores the unreliability of memory and reinvention, accidental and purposeful. It’s a beautiful collection, carefully put together, that won’t disappoint fans of Polley or the personal essay.” —James Tate Hill, The Washington Independent Review of Books

“An episodic memoir of life as an actor, director and human being unlike any I have ever read: it deals with childhood bereavement, extreme stage fright, crises of pregnancy, and abuse within the entertainment industry . . . bruisingly intelligent and candid.” —Claire Armitstead, The Guardian

“An absolutely beautiful collection of essays: a cat's cradle of emotion around the ways in which her body lives in the world. Memories surrounding anxiety, scoliosis, trauma, child acting, pressure, surgery and repair coalesce in this brilliant, incisive, literary leap through Polley's mind.” —Zibby Owens, Good Morning America

“Meaty . . . the book is most interesting when Polley interrogates her own contradictions and manipulative instincts, many of which were a matter of survival . . . The little girl who carried the weight of Hollywood movie budgets and theater actors’ salaries on her shoulders is now a grown woman whose stolen childhood has made her at once a stunningly sophisticated observer of the world and an imperfect witness to the truth. Her willingness to embrace such paradoxes, in this book as well as in her films, is the mark of a real artist.” —Meghan Daum, The New York Times Book Review

“The six essays in this book are united by her careful, prismatic examination at the gulf between what we feel in the moment and how we feel in the aftermath. . . . As a writer, Polley runs towards the danger at every moment, unafraid of being likable, coming upon great truths about the human condition in the murk, and it’s totally unfair that she can now add great writer to her intimidating list of accomplishments.” —Elisabeth Donnelly, Buzzfeed

“Sarah Polley has embodied what feels like multiple lives. She’s been Canada’s sweetheart, a teen activist, an Academy Award-nominated screenwriter, a documentarian, a filmmaker, and a TV director. It’s no wonder her diverse body of work tends to center on protagonists whose identities are shifting and morphing under the weight of an unexamined past and a tense present. In this essay collection, Polley projects that recurring question of memory on pivotal moments in her own life for a book that promises to be more vulnerable and introspective than your usual child-star-turned-adult narrative.” —The A.V. Club

“Fascinating, harrowing, courageous, and deeply felt, these explorations of ‘dangerous stories,’ harmful past events, and trials of the soul speak to all who’ve encountered dark waters and have had to navigate them.” —Margaret Atwood, via Twitter

“I loved this book! Like light refracted through a prism, each essay offers a unique view of the rich inner world and illustrious career of one of our most important artists. Smart, funny, devastating and compassionate—often all in the same paragraph—Run Towards the Danger reminds us of literature’s power to synthesize the human condition and to transform a reader in the process.” —Alison Pick, Man Booker Prize-nominated author of Far to Go

“In Run Towards the Danger, Sarah Polley does just that. She tells us the truth, even when it feels razor sharp—even when it feels dangerous. She rips away at painful past experiences that she’s never shared before, and in this way emboldens us to sharpen our gaze on the shadowed moments in our own past, to understand their provenance and to bring meaning to them. She shows us how, by doing this, we can begin to move towards that specific peace of mind—you might even call it joy—that comes with confronting our demons and knowing ourselves. These brilliant essays (and Sarah Polley, with her melioristic heart and empathic eye) urge us, by example, towards the examined life, the life worth living, and give us a jolt of energy to muster the courage and compassion needed to live it.” —Miriam Toews, author of Women Talking

“Sarah Polley understands that questions of conscience are inseparable from the terrors and tenderness of the body, and that courage—moral or physical—is not fearlessness but our relationship to fear. How we confront pain, how we determine what is safe, how we comprehend the depth and limits of our responsibility to others and to ourselves—these are exacting, keening questions. This is a powerful and moving book, both in its seeking and its wisdom.” —Anne Michaels, author of The Winter Vault