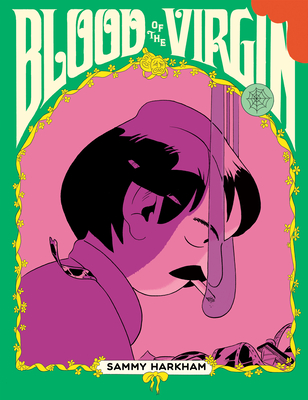 After fourteen years, renowned and beloved graphic novelist Sammy Harkham finally delivers his epic story of artistic ambition, the heartbreak it can bring, and what it means to be human

Set in and around 1971 in Los Angeles, Blood of the Virgin follows an immigrant film editor named Seymour who is desperate to make his own movies. Without money or clout, he has no choice but to spend his days slumming it for the worst and most exploitative production company in town. When Seymour is given the chance to make a film of his own, his unbending principles and relentless drive violently clash with an industry that rewards everything but these traits. As Seymour’s blind ambition pushes the movie along, his home life grows increasingly fraught. Using the film’s production as a means to spiral out into time and space, Harkham creates an epic novel that explores the intersection of parenthood, 20th-century America, sex, the immigrant experience, and the era of grindhouse movies. Like a kaleidoscope, Blood of the Virgin shifts and evolves with each frame, allowing the reader to zoom out and see that at its core, this book is about the making of a man.

SAMMY HARKHAM is an award-winning cartoonist and editor, born and raised in Los Angeles. He created the ongoing comics anthology Kramers Ergot, considered to be one of the most influential publications of its kind in the twenty-first century. His first collection of short comics stories, Everything Together, won the Los Angeles Book Prize for “Graphic Novel of the Year” in 2012. He is also the author of Crickets (Drawn and Quarterly) and Poor Sailor (Ginkgo Press). In 2022, he was awarded the Ignatz Award for “Promising New Talent.” His work has been published in Best American Comics, The New York Times, Vice, and McSweeney’s among many other publications.

“At its heart, Blood of the Virgin is a story about storytelling—the stories people tell themselves and others. This graphic novel convincingly conjures up the grindhouse movie-making scene in 1970s Los Angeles and tracks an ambitious young man’s flailing attempts to build a family and a career as a film arteest in that debased world. Sammy Harkham devoted fourteen years to making this book; we see him develop into a master comics artist, and he shows himself to be an astonishingly complex and subtle storyteller. Blood of the Virgin rewards reading slowly and re-reading—it’s a book with a lot of heart.”
—Art Spiegelman, bestselling author of MAUS

“Blood of the Virgin encompasses many locations, decades, experiences, and points of view, but always maintains its fundamentally relevant and modest human size. The story never goes where you expect it to, but there’s never a sense of error; and after the story is told you see that there’s not been a single misstep, and all is as it should be. Where did this book come from? It’s a complex and thorough portrait of a world I didn’t even know I was curious about, saturated with charm and rendered with the sure hand of an artist working at the height of his powers.”
—Patrick deWitt, bestselling author of The Sisters Brothers

“The only intersection of Sephardic outsiderism and the personal artistic struggle in termite art. I understand L.A. now.”
—Josh Safdie, award‑winning co‑director of Uncut Gems

“One thing that’s great about this book is that Harkham is thorough. He doesn’t leave anything out. Especially when it comes to the unattainable.”
—Jaime Hernandez, member, Will Eisner Comic Awards Hall of Fame, and co‑creator of Love and Rockets