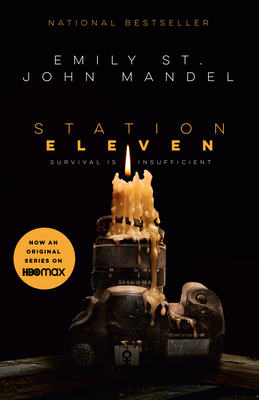 NATIONAL BESTSELLER • An audacious, darkly glittering novel set in the eerie days of civilization’s collapse—the spellbinding story of a Hollywood star, his would-be savior, and a nomadic group of actors roaming the scattered outposts of the Great Lakes region, risking everything for art and humanity. Now an original series on HBO Max. Over one million copies sold!

Kirsten Raymonde will never forget the night Arthur Leander, the famous Hollywood actor, had a heart attack on stage during a production of King Lear. That was the night when a devastating flu pandemic arrived in the city, and within weeks, civilization as we know it came to an end.

Twenty years later, Kirsten moves between the settlements of the altered world with a small troupe of actors and musicians. They call themselves The Traveling Symphony, and they have dedicated themselves to keeping the remnants of art and humanity alive. But when they arrive in St. Deborah by the Water, they encounter a violent prophet who will threaten the tiny band’s existence. And as the story takes off, moving back and forth in time, and vividly depicting life before and after the pandemic, the strange twist of fate that connects them all will be revealed.

EMILY ST. JOHN MANDEL's five previous novels include The Glass Hotel and Station Eleven, which was a finalist for a National Book Award and the PEN/Faulkner Award for Fiction and has been translated into thirty-five languages. She lives in New York City.

“Station Eleven is so compelling, so fearlessly imagined, that I wouldn’t have put it down for anything.” —Ann Patchett

“A superb novel . . . [that] leaves us not fearful for the end of the word but appreciative of the grace of everyday existence.” —San Francisco Chronicle

“Deeply melancholy, but beautifully written, and wonderfully elegiac . . . A book that I will long remember, and return to.” —George R. R. Martin

“Darkly lyrical. . . . A truly haunting book, one that is hard to put down." —The Seattle Times

“Mandel delivers a beautifully observed walk through her book’s 21st century world. . . . I kept putting the book down, looking around me, and thinking, ‘Everything is a miracle.’”—Matt Thompson, NPR

“My book of the year.” —Karen Joy Fowler, author of We Are All Completely Beside Ourselves

“Station Eleven is the kind of book that speaks to dozens of the readers in me—the Hollywood devotee, the comic book fan, the cult junkie, the love lover, the disaster tourist. It is a brilliant novel, and Emily St. John Mandel is astonishing.” —Emma Straub, author of The Vacationers

“Even if you think dystopian fiction is not your thing, I urge you to give this marvelous novel a try. . . . [An] emotional and thoughtful story.” —Deborah Harkness, author of The Book of Life

“It’s hard to imagine a novel more perfectly suited, in both form and content, to this literary moment. Station Eleven, if we were to talk about it in our usual way, would seem like a book that combines high culture and low culture—'literary fiction' and 'genre fiction.' But those categories aren’t really adequate to describe the book.” —The New Yorker

“Audacious. . . . A book about gratitude, about life right now, if we can live to look back on it." —Minneapolis Star-Tribune

“A surprisingly beautiful story of human relationships amid devastation.” —The Washington Post

“Possibly the most captivating and thought-provoking post-apocalyptic novel you will ever read.” —The Independent (London)

“A firework of a novel . . . full of life and humanity and the aftershock of memory.” —Lauren Beukes, author of The Shining Girls

“One of the best things I’ve read on the ability of art to endure in a good long while.” —Tobias Carroll, Electric Literature

“A big, brilliant, ambitious, genre-bending novel. . . . Hands-down one of my favorite books of the year.” —Sarah McCarry, Tor.com

“Strange, poetic, thrilling, and grim all at once, Station Eleven is a prismatic tale about survival, unexpected coincidences, and the significance of art.” —Bustle, “Best Book of the Month”

“Disturbing, inventive and exciting, Station Eleven left me wistful for a world where I still live.” —Jessie Burton, author of The Miniaturist