The Wife of Willesden (Paperback) 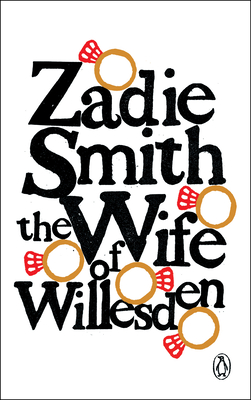 “Married five times. Mother. Lover. Aunt. Friend.
She plays many roles round here. And never
Scared to tell the whole of her truth, whether
Or not anyone wants to hear it. Wife
Of Willesden: pissed enough to tell her life
Story to whoever has ears and eyes . . .”

In her stage-writing debut, celebrated novelist and essayist Zadie Smith brings to life a comedic and cutting twenty-first century translation of Geoffrey Chaucer’s classic The Wife of Bath. The Wife of Willesden follows Alvita, a Jamaican-born British woman in her mid-50s, as she tells her life story to a band of strangers in a small pub on the Kilburn High Road. Wearing fake gold chains, dressed in knock-off designer clothes, and speaking in a mixture of London slang and patois, Alvita recalls her five marriages in outrageous, bawdy detail, rewrites her mistakes as triumphs, and shares her beliefs on femininity, sexuality, and misogyny with anyone willing to listen.

A thoughtful reimagining of an unforgettable narrative of female sexual power, written with singular verve and wit, The Wife of Willesden shows why Zadie Smith is one of the sharpest and most versatile writers working today.

Zadie Smith is the author of the novels White Teeth, The Autograph Man, On Beauty, NW, and Swing Time, as well as a novella, The Embassy of Cambodia, three collections of essays, Changing My Mind, Feel Free, and Intimations, and a short story collection, Grand Union. She is also the editor of The Book of Other People. Zadie was elected a fellow of the Royal Society of Literature in 2002, and was listed as one of Granta's 20 Best Young British Novelists in 2003 and again in 2013. White Teeth won multiple literary awards including the James Tait Black Memorial Prize, the Whitbread First Novel Award and the Guardian First Book Award. On Beauty was shortlisted for the Man Booker Prize and won the Orange Prize for Fiction, and NW was shortlisted for the Baileys Women's Prize for Fiction. Zadie Smith is currently a Member of the American Academy of Arts and Letters. She is a regular contributor to The New Yorker and The New York Review of Books.