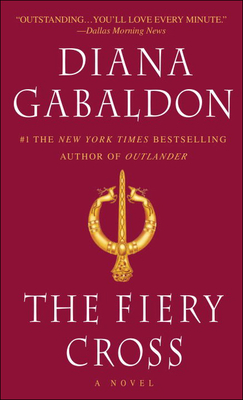 Crossing the boundaries of genre with its unrivalled storytelling, Diana Gabaldon's new novel is a gift both to her millions of loyal fans and to the lucky readers who have yet to discover her.
In the ten years since her extraordinary debut novel, Outlander, was published, beloved author Diana Gabaldon has entertained scores of readers with her heart-stirring stories and remarkable characters. The four volumes of her bestselling saga, featuring eighteenth-century Scotsman James Fraser and his twentieth-century, time-travelling wife, Claire Randall, boasts nearly 5 million copies in the U.S.
The story of Outlander begins just after the Second World War, when a British field nurse named Claire Randall walks through a cleft stone in the Scottish highlands and is transported back some two hundred years to 1743.
Here, now, is The Fiery Cross, the eagerly awaited fifth volume in this remarkable, award-winning series of historical novels. The year is 1771, and war is approaching. Jamie Fraser's wife has told him so. Little as he wishes to, he must believe it, for hers is a gift of dreadful prophecy--a time-traveller's certain knowledge. To break his oath to the Crown will brand him a traitor; to keep it is certain doom. Jamie Fraser stands in the shadow of the fiery cross--a standard that leads nowhere but to the bloody brink of war.