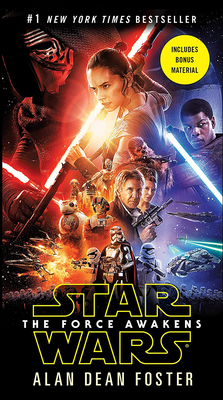 #1 "NEW YORK TIMES" BESTSELLER The official novelization of "Star Wars: The Force Awakens, " the blockbuster film directed by J. J. Abrams Includes two tie-in short stories: The Perfect Weapon by Delilah S. Dawson and Bait by Alan Dean Foster
More than thirty years ago, "Star Wars" burst onto the big screen and became a cultural phenomenon. Now the next adventures in this blockbuster saga are poised to captivate old and new fans alike beginning with the highly anticipated "Star Wars: The Force Awakens." And alongside the cinematic debut comes the thrilling novel adaptation by "New York Times" bestselling science fiction master Alan Dean Foster.
Set years after "Return of the Jedi, "this stunning new action-packed adventure rockets us back into the world of Princess Leia, Han Solo, Chewbacca, C-3PO, R2-D2, and Luke Skywalker, while introducing a host of exciting new characters. Darth Vader may have been redeemed and the Emperor vanquished, but peace can be fleeting, and evil does not easily relent. Yet the simple belief in good can still empower ordinary individuals to rise and meet the greatest challenges.
So return to that galaxy far, far away, and prepare yourself for what happens when the Force awakens. . . .
Praise for "Star Wars: The Force Awakens"
""
Like all the best novelizations, Alan Dean Foster's adaptation of "Star Wars: The Force Awakens" enriches the movie experience. The novel goes beyond simply giving us insight into the characters thoughts, with plenty of additional scenes painting a broader picture of the galaxy. New York "Daily News"
""
Fast-moving, atmospheric and raises goose-bumps at just the right moments. Foster] not only evokes entire onscreen worlds . . . he also gives us glimpses of an even more vast, unseen universe. "The Washington Post"
""
Was my experience of the film enriched by the book? Yes. No question. Is the novelization worth reading? Yes. . . . Foster has written a book that captures the spirit of the film, while presenting additional information that helps answer some of the questions that linger. "Coffee with Kenobi.

Alan Dean Foster has written in a variety of genres, including hard science fiction, fantasy, horror, detective, western, historical, and contemporary fiction. He is the author of the "New York Times" bestseller" Star Wars: The Approaching Storm" and the popular Pip & Flinx novels, as well as novelizations of several films, including "Transformers, Star Wars, "the first three "Alien" films, and "Alien Nation." His novel "Cyber Way" won the Southwest Book Award for Fiction, the first science fiction work ever to do so. Foster and his wife, JoAnn Oxley, live in Prescott, Arizona. "From the Hardcover edition."