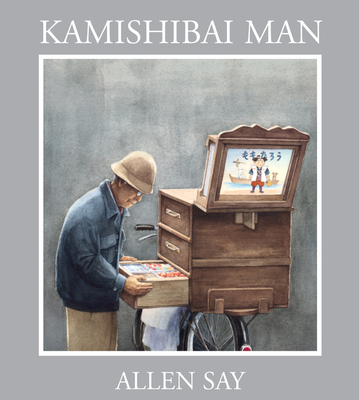 The Kamishibai man used to ride his bicycle into town where he would tell stories to the children and sell them candy, but gradually, fewer and fewer children came running at the sound of his clappers. They were all watching their new televisions instead. Finally, only one boy remained, and he had no money for candy. Years later, the Kamishibai man and his wife made another batch of candy, and he pedaled into town to tell one more story—his own. When he comes out of the reverie of his memories, he looks around to see he is surrounded by familiar faces—the children he used to entertain have returned, all grown up and more eager than ever to listen to his delightful tales.

Using two very different yet remarkable styles of art, Allen Say tells a tale within a tale, transporting readers seamlessly to the Japan of his memories.

Allen Say was born in Yokohama, Japan, in 1937. He dreamed of becoming a cartoonist from the age of six, and, at age twelve, apprenticed himself to his favorite cartoonist, Noro Shinpei. For the next four years, Say learned to draw and paint under the direction of Noro, who has remained Say's mentor. Say illustrated his first children's book -- published in 1972 -- in a photo studio between shooting assignments. For years, Say continued writing and illustrating children's books on a part-time basis. But in 1987, while illustrating THE BOY OF THE THREE-YEAR NAP (Caldecott Honor Medal), he recaptured the joy he had known as a boy working in his master's studio. It was then that Say decided to make a full commitment to doing what he loves best: writing and illustrating children's books. Since then, he has written and illustrated many books, including TREE OF CRANES and GRANDFATHER'S JOURNEY, winner of the 1994 Caldecott Medal. He is a full-time writer and illustrator living in Portland, Oregon.

"Say's gift is to multiply themes without struggling under their weight. . . . His artistry and power of invention are as strong as ever, and so will be his readers' enthusiasm." —Publishers Weekly, starred Publishers Weekly, Starred

"The quietly dramatic, beautifully evocative, tale contains a cliffhanger of its own, along with exquisite art in the style of Kamishibai picture cards that will attract even the most jaded kid away from the TV screen to enjoy a good, good book." -- Booklist, starred Booklist, ALA, Starred Review