Under the Starry Flag: How a Band of Irish Americans Joined the Fenian Revolt and Sparked a Crisis Over Citizenship (Paperback) 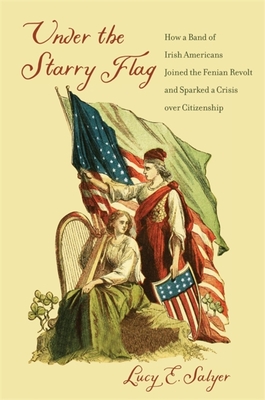 By Lucy E. Salyer
Email or call for price.
Not in stock. Available To Order.

"A stunning accomplishment...As the Trump administration works to expatriate naturalized U.S. citizens, understanding the history of individual rights and state power at the heart of Under the Starry Flag could not be more important."
--Passport "A brilliant piece of historical writing as well as a real page-turner. Salyer seamlessly integrates analysis of big, complicated historical questions--allegiance, naturalization, citizenship, politics, diplomacy, race, and gender--into a gripping narrative."
--Kevin Kenny, author of The American Irish In 1867 forty Irish American freedom fighters, outfitted with guns and ammunition, sailed to Ireland to join the effort to end British rule. They were arrested for treason as soon as they landed. The Fenians, as they were called, claimed to be American citizens, but British authorities insisted that they remained British subjects. Following the Civil War, the Fenian crisis dramatized the question of whether citizenship should be considered an inalienable right. This gripping legal saga, a prelude to today's immigration battles, raises important questions about immigration, citizenship, and who deserves to be protected by the law.