The Perfect Fascist: A Story of Love, Power, and Morality in Mussolini's Italy (Hardcover) 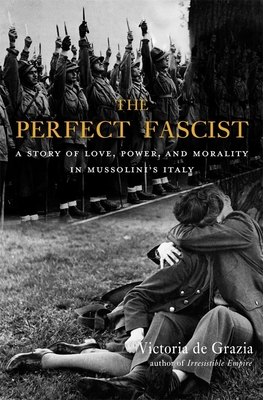 By Victoria de Grazia
$35.00
Possibly out of print. Email or call to check availability and price.

Winner of the Helen and Howard R. Marraro Prize
Winner of the Aldo and Jeanne Scaglione Prize for Italian Studies
A New Statesman Book of the Year

"As Fellini did in film, The Perfect Fascist takes us into the dark and complicated heart of Italian fascism...It is an extraordinary story that illuminates the ways in which the all-consuming nature of fascism distorted Italian society and destroyed the lives of individuals. I could not put it down."
--Margaret MacMillan, author of Paris 1919 "With lyrical precision, The Perfect Fascist reveals how ideology corrupts the truth, how untrammeled ambition destroys the soul, and how the vanity of white male supremacy distorts emotion, making even love a matter of state."
--Sonia Purnell, author of A Woman of No Importance Through the story of one exemplary fascist--a war hero turned commander of Mussolini's Black Shirts--the award-winning author of How Fascism Ruled Women reveals how the personal became political in the fascist quest for manhood and power. When Attilio Teruzzi, Mussolini's handsome political enforcer, married a rising young American opera star, his good fortune seemed settled. The wedding was a carefully stage-managed affair, capped with a blessing by Mussolini himself. Yet only three years later, after being promoted to commander of the Black Shirts, Teruzzi renounced his wife. In fascist Italy, a Catholic country with no divorce law, he could only dissolve the marriage by filing for an annulment through the medieval procedures of the Church Court. The proceedings took an ominous turn when Mussolini joined Hitler: Lilliana Teruzzi was Jewish, and fascist Italy would soon introduce its first race laws. The Perfect Fascist pivots from the intimate story of a tempestuous seduction and inconvenient marriage--brilliantly reconstructed through family letters and court records--to a riveting account of Mussolini's rise and fall. It invites us to see in the vain, loyal, lecherous, and impetuous Attilio Teruzzi, a decorated military officer, an exemplar of fascism's New Man. Why did he abruptly discard the woman he had so eagerly courted? And why, when the time came to find another partner, did he choose another Jewish woman as his would-be wife? In Victoria de Grazia's engrossing account, we see him vacillating between the will of his Duce and the dictates of his heart. De Grazia's landmark history captures the seductive appeal of fascism and shows us how, in his moral pieties and intimate betrayals, his violence and opportunism, Teruzzi is a forefather of the illiberal politicians of today.