Where I Was from (Hardcover) 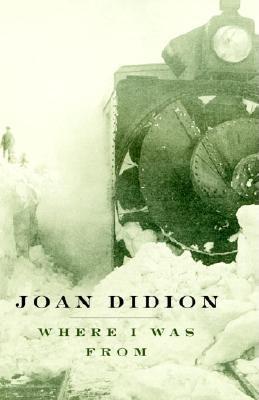 In this moving and unexpected book, Joan Didion reassesses parts of her life, her work, her history, and ours. Where I Was From, in Didion's words, -represents an exploration into my own confusions about the place and the way in which I grew up, confusions as much about America as about California, misapprehensions and misunderstandings so much a part of who I became that I can still to this day confront them only obliquely.- The book is a haunting narrative of how her own family moved west with the frontier from the birth of her great-great-great-great-great-grandmother in Virginia in 1766 to the death of her mother on the edge of the Pacific in 2001; of how the wagon-train stories of hardship and abandonment and endurance created a culture in which survival would seem the sole virtue.
In Where I Was From, Didion turns what John Leonard has called -her sonar ear, her radar eye- onto her own work, as well as that of such California writers as Frank Norris and Jack London and Henry George, to examine how the folly and recklessness in the very grain of the California settlement led to the California we know today-a state mortgaged first to the railroad, then to the aerospace industry, and overwhelmingly to the federal government, a dependent colony of those political and corporate owners who fly in for the annual encampment of the
Bohemian Club. Here is the one writer we always want to read on California showing us the startling contradictions in its-and in America's-core values.
Joan Didion's unerring sense of America and its spirit, her acute interpretation of its institutions and literature, and her incisive questioning of the stories it tells itself make this fiercely intelligent book a provocative and important tour de force from one of our greatest writers.

Joan Didion was born in California and lives in New York. She is the author of five novels and six previous books of nonfiction: Political Fictions, After Henry, Miami, Salvador, The White Album, and Slouching Towards Bethlehem. Joan Didion's Political Fictions, The Last Thing He Wanted, After Henry, Miami, Democracy, Salvador, A Book of Common Prayer, Slouching Towards Bethlehem, and Run River are available in Vintage paperback.