Dreams of a Final Theory: The Scientist's Search for the Ultimate Laws of Nature (Paperback) 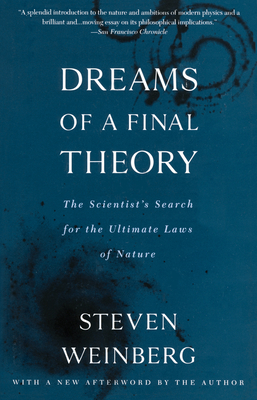 The Nobel Prize-winning physicist and bestselling author of The First Three Minutes describes the grand quest for a unifying theory of nature--one that can explain forces as different as the cohesion inside the atom and the gravitational tug between the sun and Earth. Wirting with dazzling elegance and clarity, he retraces the steps that have led modern scientists from relativity and quantum mechanics to the notion of super-strings and the idea that our universe may coexist with others.

But Weinberg asks as many questions as he answers, among them: Why does each explanation of the way nature works point to other, deeper explanations? Why are the best theories not only logical but beautiful? And what implications will a final theory have for our philosophy and religious faith?

Intellectually daring, rich in anecdote and aphorism, Dreams of a Final Theory launches us into a new cosmos and helps us make sense of what we find there.

Steven Weinberg received the 1979 Nobel Prize for Physics for his work in unifying two of the fundamental forces of nature, and in 1991 he was awarded the National Medal of Science at the White House. His earlier price-winning book The First Three Minutes is the classic account of the "Big Bang," the modern theory of the origins of the universe. Among his other books are The Theory of Subatomic Particles and Gravitation and Cosmology: Principles and Applications of the General Theory of Relativity. Steven Weingberg is a member of the Royal Society of London as well as the U.S. National Academy of Sciences, and has been awarded numerous honorary degrees, most recently from Columbia University and the Universities of Salamanca and Padua.