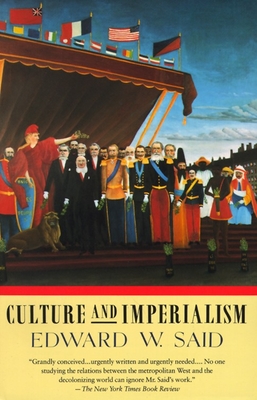 A landmark work from the author of Orientalism that explores the long-overlooked connections between the Western imperial endeavor and the culture that both reflected and reinforced it.

In the nineteenth and early twentieth centuries, as the Western powers built empires that stretched from Australia to the West Indies, Western artists created masterpieces ranging from Mansfield Park to Heart of Darkness and Aida. Yet most cultural critics continue to see these phenomena as separate. Edward Said looks at these works alongside those of such writers as W. B. Yeats, Chinua Achebe, and Salman Rushdie to show how subject peoples produced their own vigorous cultures of opposition and resistance. Vast in scope and stunning in its erudition, Culture and Imperialism reopens the dialogue between literature and the life of its time.

Edward W. Said was born in 1935 in Jerusalem, raised in Jerusalem and Cairo, and educated in the United States, where he attended Princeton (B.A. 1957) and Harvard (M.A. 1960; Ph.D. 1964). In 1963, he began teaching at Columbia University, where he was University Professor of English and Comparative Literature. He died in 2003 in New York City.

He is the author of twenty-two books which have been translated into 35 languages, including Orientalism (1978); The Question of Palestine (1979); Covering Islam (1980); The World, the Text, and the Critic (1983); Culture and Imperialism (1993); Peace and Its Discontents: Essays on Palestine and the Middle East Peace Process (1996); and Out of Place: A Memoir (1999). Besides his academic work, he wrote a twice-monthly column for Al-Hayat and Al-Ahram; was a regular contributor to newspapers in Europe, Asia, and the Middle East; and was the music critic for The Nation.

"Grandly conceived . . . urgently written and urgently needed. . . . No one studying the relations between the metropolitan West and the decolonizing world can ignore Mr. Said's work.' --The New York Times Book Review

"Culture and Imperialism has an eloquent, urgent topicality rare in books by literary critics. . . . Said is a brilliant and unique amalgam of scholar, aesthete, and political activist. . . . His learning is global." --Washington Post Book World

"Rough-and-ready scholarship from today's street fight in the humanities. . . . Said reads passionately and bravely. . . . He challenges everyone to read fiction in the most comprehensive manner possible." --Philadelphia Inquirer

"Readers accustomed to the precision and elegance of Edward Said's analytical prowess will not be disappointed by Culture and Imperialism. Those discovering Said for the first time will be profoundly impressed." --Toni Morrison

"In Culture and Imperialism, Edward Said's immense erudition and interpretive audacity are brought to bear on a variety of literatures, reanimating the terms of his title and discovering, in the process, how some of the most revered cultural productions call upon the same energies that go into the building of empires. His book will likely become a classic of contemporary criticism." --Richard Poirier