Love Thy Neighbor: A Story of War (Paperback) 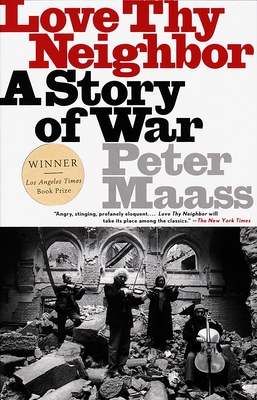 I don't expect you to want to read this. It shouldn't exist. Think of it as atrocity immersion therapy. Avoidance breeds anxiety.


Peter Maass went to the Balkans as a reporter at the height of the nightmarish war there, but this book is not traditional war reportage. Maass examines how an ordinary Serb could wake up one morning and shoot his neighbor, once a friend--then rape that neighbor's wife. He conveys the desperation that makes a Muslim beg the United States to bomb his own city in order to end the misery. And Maass does not falter at the spectacle of U.N. soldiers shining searchlights on fleeing refugees--who are promptly gunned down by snipers waiting in the darkness. Love Thy Neighbor gives us an unflinching vision of a late-20th-century hell that is also a scathing inquiry into the worst extremes of human nature. Like Michael Herr's Dispatches (also available in Vintage paperback), it is an utterly gripping book that will move and instruct readers for years to come.

Peter Maass is a contributing writer to The New York Times Magazine and has reported from the Middle East, Asia, South America and Africa. He has written as well for The New Yorker, The Atlantic Monthly, The Washington Post, and Slate. Maass is the author of Love Thy Neighbor: A Story of War, which chronicled the Bosnian war and won prizes from the Overseas Press Club and the Los Angeles Times. He lives in New York City.

"One of the definitive accounts of Bosnia's fin de siècle descent into madness"
--The Cleveland Plain Dealer).

"Moving and morally compelling.... [A] strikingly personal and passionate account of the war by...a reporter who got closer to the action and the suffering than any diplomat, policy maker or academic.... Maass lets his eye for the arresting detail and his conscience be his guides. The result is a gripping journey through a hellish war, with pit stops to meet some of the victims and their executioners. It is a hair-raising, stomach-churning and, ultimately, consciousness-raising ride, and one that will force readers to examine their own values and those of the Western powers who appeased aggressors while a quarter of a million people died horrible deaths.... Throughout the book, Maass examines two themes: first how can human beings be so monstrous to one another or stand by when others are brutalized, and second, how could Western powers, including the United States, fail to stop aggression and appease the worst war criminals in Europe."
--The Boston Globe

"Angry, stinging, profanely eloquent and often painful.... What Mr. Maass gives us in short is a view of ethnic cleansing in all of its cruelty, its absurd detail, its self-justification, its dehumanization of the other. Love Thy Neighbor will take its place among the classics of an unfortunate genre: the portrayal of humankind at its worst."
--The New York Times

"Maass' portrait of human nature at its worst is powerfully emotional.... Maass insistently and with compelling reasons recasts the [Serb and Muslim] choices as ones any one of us might make, given the proper demagogue.... Such ominous reflections elevate this book beyond the notes of a seasoned reporter to the plane of a more universal examination of the narrow self-interest that can encourage, or ignore, the savagery of which we are capable. Maass' graphic demonstration of this reality is rendered all the more stark in light of his portrayal of the generosity and desire for meaning in the face of brutality's victims."
--John C. Hawley, Santa Clara University, The San Francisco Chronicle