Houses for a New World: Builders and Buyers in American Suburbs, 1945 1965 (Hardcover) 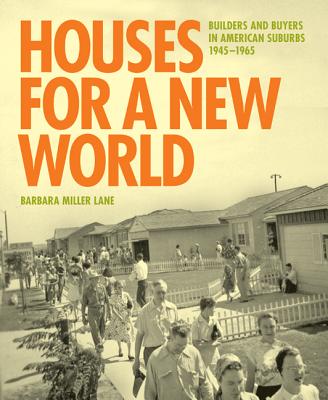 By Barbara Miller Lane
Email or call for price

While the work of Frank Lloyd Wright, Richard Neutra, and their contemporaries frequently influences our ideas about house design at the midcentury, most Americans during this period lived in homes built by little-known builders who also served as developers of the communities. Often dismissed as "little boxes, made of ticky-tacky," the tract houses of America's postwar suburbs represent the twentieth century's most successful experiment in mass housing. Houses for a New World is the first comprehensive history of this uniquely American form of domestic architecture and urbanism. Between 1945 and 1965, more than thirteen million houses--most of them in new ranch and split-level styles--were constructed on large expanses of land outside city centers, providing homes for the country's rapidly expanding population. Focusing on twelve developments in the suburbs of Boston, Philadelphia, Chicago, and Los Angeles, Barbara Miller Lane tells the story of the collaborations between builders and buyers, showing how both wanted houses and communities that espoused a modern way of life--informal, democratic, multiethnic, and devoted to improving the lives of their children. The resulting houses differed dramatically from both the European International Style and older forms of American domestic architecture. Based on a decade of original research, and accompanied by hundreds of historical images, plans, and maps, this book presents an entirely new interpretation of the American suburb. The result is a fascinating history of houses and developments that continue to shape how tens of millions of Americans live. Featured housing developments in Houses for a New World: Boston area:

Barbara Miller Lane is Andrew W. Mellon Professor Emeritusin the Humanities and Research Professor in Growth and Structure of Cities at Bryn Mawr College. Her books include Architecture and Politics in Germany, 1918-1945, National Romanticism and Modern Architecture, and Housing and Dwelling.