All the Silly Stuff in my Teeth (Hardcover) 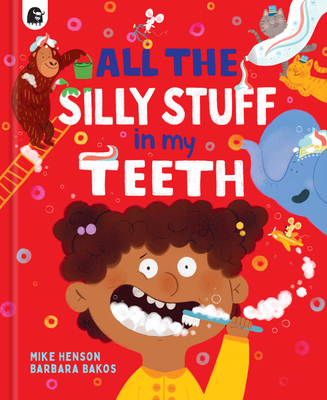 All the Silly Stuff in my Teeth is a fantastical, dream-like story about teeth brushing, that takes readers on a journey into the narrator’s imagination and encourages good personal hygiene and following a daily routine.

Tonight I brushed my teeth.
and with the usual mess,
I found all kinds of silly stuff
that you would never guess!

There were breakfast O's and ice cream scoops...
An airplane doing loop the loops
An airplane? Now that’s absurd!
Then to my shock... a flock of birds!

The charming artwork and sing-song rhyme scheme take readers on an adventure filled with fantastical imagery, as all kinds of things from cyclists doing stunts to an animal brass band are revealed inside the protagonist's mouth as they brush their teeth!

With entertaining illustrations from Barbara Bakos, let this wonderful picture book transport you and your children to another world before they go to sleep.

Mike Henson grew up in Zimbabwe, but after bobbing around the world, has ended up on a little island off the south coast of England. Mike and his wife have three children, who they suspect might be monkeys, and secret plans to steal a baby hippo (it hasn't happened yet—and probably won't—ever!). Mike loves to create—stories, pictures, songs and mess in the kitchen. As an author, illustrator, and designer his main workspace is a little caravan in the garden, crammed full of books, sketch pads, pencils, and other nonsense.

Barbara Bakos grew up on the suburb of Budapest next to a little forest. She graduated as an animation director at the Moholy-Nagy University of Art and Design Budapest, but she always knew that she wanted to spend more time as an illustrator. She has a big passion for creating worlds with her characters, making up how they work together within an atmosphere, what they feel, and what the story is behind them.