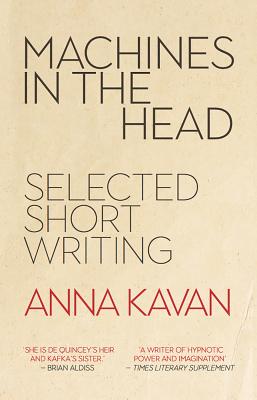 By Anna Kavan
$27.95
Possibly out of print. Email or call to check availability and price.

Described by Brian Aldiss as "De Quincey’s heir and Kafka’s sister," junkie, depressive, radical, enigma, cult figure, genre-bending experimental writer and artist—few women writers have gathered the same air of mystique, so often the preserve of male counter-culture figures, as Helen Woods, more commonly known by her adopted pen name and persona: Anna Kavan. This anthology of Anna Kavan’s short fiction and journalism marks the 50 years since her death in 1968, offering an accessible introduction to readers new to her work and a timely survey of her diverse literary talents for her fans. From moving portraits of clinical depression to phantasmagoric visions of science-fiction wonder, the selection is taken from across Kavan’s oeuvre, representing the best of her writing and showing the range of her style. Readers will encounter oblique and elegiac tales of breakdown and incarceration from Asylum Piece (1940), moving evocations of wartime from I Am Lazarus (1945), fantastic and surrealist pieces from A Bright Green Field (1958) and stories of heroin addiction from Julia and the Bazooka (1970). Her science-fiction stories will appeal to fans of her final novel Ice, while the previously unpublished ‘Starting a Career’ is a futuristic spy-thriller. Writing for the magazine Horizon between 1943 and 1946, Kavan revealed her personal and political views. She was pacifist, nihilist, atheist and vehemently anti-fascist; she implicitly believed in people’s mutual responsibility for one another and was preoccupied with those who were dispossessed, marginalized or alone. Her book reviews reveal something of her literary tastes and influences as well as being a platform for her beliefs regarding psychology, ethics and the importance of art and literature in turbulent times. Machines in the Head shows the extraordinary range of Kavan’s work, which is, by turns, moving, funny, bizarre, poignant, often unsettling but always distinctive and unique.

Anna Kavan (1901-1968) was a British experimental writer and artist. She is best known for her collections of stories including Asylum Piece, I Am Lazarus and Julia and the Bazooka and for her novels including Sleep Has His House and Ice.

"Entering this haunting realm, the reader will crave to plunge deeper into her metallic and poetically surreal universe." —Patti Smith

"A writer of such chillingly matter-of-fact unself-pitying vigor that her vision transcends itself." —New Yorker

"It is the cool lucid light of that unique mind which makes her Anna Kavan . . . There is nothing else like her writing . . . She is one of the most distinctive twentieth-century novelists." —Doris Lessing

"If you love J.G. Ballard, you should read Anna Kavan." —Chris Power, Guardian

"She is de Quincey’s heir and Kafka’s sister.’ – Brian Aldiss

"Kavan’s talent for extracting an austere beauty from intimations of doom is as compelling here as in so much of her greatly admired work.’ – Rhys Davies ‘Kavan wrote some of the twentieth century’s most haunting and original fiction . . . To those cultish fans who see Kavan’s marginality as central to her glamour, mainstream acceptance may be unwelcome. But for this most imaginative and otherworldly of writers, whose plots seamlessly merge fantasy and reality, past and future, life and death, nothing could be more apt than a cross-century literary resurrection." Emma Garman, Paris Review

"A writer of hypnotic power and imagination." —Times Literary Supplement